The female officer who killed a man, because she reached for her service revolver instead of her taser, is another item in the case made in this column, “Systemic, Institutional Rot: From Big Freeze In Texas To Fires In Cali.”

Clearly, Kim Potter accidentally discharged her weapon. She did not mean to kill Daunte Wright.  This only strengthens the case against women in the force. This was a veteran officer, who had worked for the Brooklyn Center Police for 26 years!

In my opinion. Weapons are just not natural to us.

I say this as my one piece rests on my desk; I’m never without it. (I use a revolver precisely because I’m pretty clumsy, and my digits aren’t even strong enough to rack the slide. Revolvers are female-proof.) 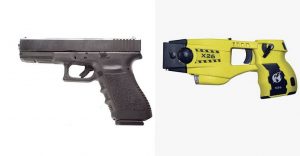 The video of the incident that was circulated by police shows the officer shouting out “Taser, Taser, Taser” before shooting, and then appearing to realise she had used a handgun instead. The officer, Kim Potter, … has resigned, and been charged with second-degree manslaughter.

This is a case, to quote from the column, “ Systemic, Institutional Rot: From Big Freeze In Texas To Fires In Cali, “of systemic stupidity; systemic rot. …”

“Things start to fall apart when the best-person-for-the-job ethos gives way to racial and gender window-dressing and to the enforcement of politically pleasing perspectives.”

The American government is marred, at every level, with similar set-asides, preferential hiring practices and affirmative action, which compromise an already compromised institution (the State, where incentives are inverted, as in the less efficient they are, the more funds government departments get). MORE.

And now, a policewoman, probably a very decent lady, is in a terrible bind, her life having been destroyed.