Without question and with deep conviction, the moron media repeat the storyline about kids being ripped from their parents’ arms, and caged on entering the US illegally (by a president who—OMG!—enforced US immigration law, for the benefit of the American People):

Federal court filings made this week by the American Civil Liberties Union and the Justice Department say that the parents of some 545 migrant children who are currently in the United States have not been found. These parents were separated from their children at the U.S. border by border officials under President Trump’s zero tolerance policy from 2017 to 2018, and the filing says the parents are now unreachable.

Kids are not what they are cut out to be (joke alert #1).

And these particular kids? I don’t know. I’ve searched the Internet for images of tender toddlers caged. All I found are images of large, hirsute young adults, who look like they can stand on their own feet, maybe even join a gang. 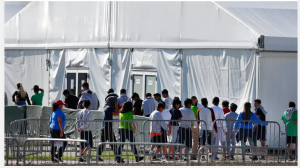 Besides, what kind of parent can’t call a US government agency to locate his kid? An incompetent parent or, joke alert #2 for the mirthless, a parent who is not too keen on getting that “kid” back, a sentiment I understand. Completely. They don’t make kids the way they used to.

In “Why Are Unfit Parents Fit To Become Americans?” it was pointed out that “bad parents will continue to deploy children as human shields to gain entry into the US”; and that “it’s unfortunate that children are born into disorganized, chaotic families. But a child is either the responsibility of his parents or of the state.”

The judicial trend of the state as parens patriae has seen the family usurped by the state as the primary socialization agent. The state-as-parent is the purview of progressives, not conservatives.

This question was posed: “Parents who put kids is such precarious a predicament are unfit. Why, then, are unfit parents fit to become Americans?”

I’m with the Mexican parents. You win some, you lose some–kids, that is (joke alert #3).

Once upon a time, American writers shared this sense of humor (wow; I am apologizing for wit). Remember the classic short story by William Sydney Porter, aka O. Henry’s (1862-1910)?

My all-time favorite fictional kid has to be the kid in the “The Ransom of Red Chief.”

Not only is “The Ransom of Red Chief” an American classic (written by a Southerner, of course)—it hearkens back to a time when kids had character; kid character.

Basically, the kidnapped kid, “Red Chief,” is so imaginatively naughty—never evil or wicked—that his traumatized kidnappers end up paying his wealthy grandad to take him back.

Grandad just sits back and waits. He knows the score.

2 thoughts on “No Offense ‘Caged Kids,’ But Your Parents Probably Don’t Want To Get You Back (Humor Alert)”