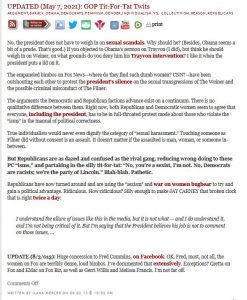 No, the president does not have to weigh in on sexual scandals. Why should he? (Besides, Obama seems a bit of a prude. That’s good.) If you objected to Obama’s sermon on Trayvon (I did), but think he should weigh in on Weiner, on what grounds do you deny him his Trayvon intervention? I like it when the president puts a lid on it.

The empaneled bimbos on Fox News—where do they find such dumb women? CNN?—have been outshouting each other to protest the president’s silence on the sexual transgressions of The Weiner and the possible criminal misconduct of The Filner.

The arguments the Democratic and Republican factions advance exist on a continuum. There is no qualitative difference between them. Right now, both Republican and Democratic women seem to agree that everyone, including the president, has to be in full-throated protest mode about those who violate the “isms” in the manual of political correctness.

True individualists would never even dignify the category of “sexual harassment.” Touching someone as Filner did without consent is an assault. It doesn’t matter if the assaulted is man, woman, or someone in-between.

But Republicans are as dazed and confused as the rival gang, reducing wrong-doing to these PC “isms,” and partaking in the silly tit-for-tat: “No, you’re a sexist, I’m not. No, Democrats are racists; we’re the party of Lincoln.” Blah-blah. Pathetic.

Republicans have now turned around and are using the “sexism” and war on women bugbear to try and gain a political advantage. Ridiculous. How ridiculous? Silly enough to make JAY CARNEY that broken clock that is right twice a day:

I understand the allure of issues like this in the media, but it is not what — and I do understand it, and I’m not being critical of it. But I’m saying that the President believes his job is not to comment on those issues, …

UPDATE (8/3/013): Huge concession to Fred Cummins, on Facebook: OK, Fred, most, not all, the women on Fox are terribly dense, loud bimbos. I’ve documented that extensively. Exceptions? Gretta on Fox and EMac on Fox Biz, as well as Gerri Willis and Melissa Francis. I’m not far off.