Christopher Ruso’s fluid, but flaccid, reply to this question, posed by Marc Lamont Hill, encapsulates what is meant by a weak, apologetic case for Western man.

I believe Rufo’s one reply was that he is too much of an individualist to say. “It’s an amorphous term,” he added, “a metaphysical category,” and he also rejected the categorization of individuals.

Lamont, however, countered forthrightly that he, on the other hand, can state quite clearly what he likes about being black. Indeed, Dr. Hill asked a plain question.

Rufo then proceeded to reject the great things associated with Western mannerisms and habits, universalizing these, instead.

Going by the Federalist writer mentioned in this 2020 column, conservatives like Stella Morabito and Rufo refuse to even take credit for the “oppressive” culture for which Europeans are being berated. Ludicrously, they both universalize the Protestant Ethic.

Recall the “Smithsonian display on whiteness”? It condemned as “white” all elements of a civilized society, including politeness, hard work, self-reliance, logic, planning, delayed gratification, and family cohesion.

“None of those are ‘white’ values,” assured Morabito, the apologist from the Federalist, as she criticizes Critical Race Theory for framing them as white. Ditto Rufo.

Imagine being so obsequious and apologetic as to wash your hands of a really cool thing you invented, evolved or were born into: Western civilization.

Almost all these values are, moreover, most pronounced in the European culture. One might even pin them down to Western Europe, because the sanctity of a man’s word, the handshake, culminating in the legally binding contract—these are some of the cultural and religious values that allowed capitalism to take off particularly well in the Anglosphere. Arguably, these are not part of the East European ethos.

Related to the Rufo apologia is news that Princeton has ended Latin and Greek requirement for a Classics Major, so as to “address systemic racism” Hint to Mr. Rufo, who failed to defend his white self: There is no “classics” without the West. The culture of Greco-Roman antiquity was foundational and spectacular.

“What do you like about being White?” I asked this question to anti- Critical Race Theory advocate Christopher Rufo. He stated that Whiteness was always only painted as negative, so I asked him to offer something different. Peep his response: pic.twitter.com/H5IkAyv2Co

#Princeton's a f-cking sh-hole. (Hey, a hint to Mr. #Rufo, who failed to defend his #white self: There is no "classics" without the West.) Can we stop trying to gain entry to that anti-intellectual cesspool of mediocrity and conformity? https://t.co/n5QTtg3aoE

“In all, no color should be given to the claim that race is not a factor in the incidence of crime in the US and in South Africa. The vulgar individualist will contend that such broad statements about aggregate group characteristics are collectivist, ergo false. He would be wrong.”

“Generalizations,” I continued, “provided they are substantiated by hard evidence, not hunches, are not incorrect. Science relies on the ability to generalize to the larger population observations drawn from a representative sample. People make prudent decisions in their daily lives based on probabilities and generalities. That one chooses not to live in a particular crime-riddled county or country in no way implies that one considers all individual residents there to be criminals, only that a sensible determination has been made, based on statistically significant data, as to where scarce and precious resources—one’s life and property—are best invested.” (“Into The Cannibal’s Pot,” pp 40-41)

In short, generalizations about certain group characteristics are, in aggregate, valid. These, however, do not contradict the imperative to treat each and every individual as an individual.

In his infinite wisdom, but with a different—strictly empirical approach—social scientist Charles Murray has ushered into mainstream this very same truth. In a luminous little book, “Facing Reality: Two Truths about Race in America,” Murray counsels precisely that:

“…when mean differences between groups are real, it is absolutely essential to resist generalization; it is essential to accept the reality of documented group differences but to insist on thinking of and treating every person as an individual.”

Next, in “Into the cannibal’s Pot,” I explained that we conservatives and libertarians who oppose affirmative action, set asides and quotas, because of our unfettered fealty for a merit-based, free-market based society are, sadly, promoting “half-truths,” as I put it. Here’s why:

“Free market economists have long since insisted that the rational, self-interest of individuals in private enterprise is always not to discriminate. ‘The market is color-blind,’ said Milton Friedman. ‘No one who goes to the market to buy bread knows or cares whether the wheat was grown by a Jew, Catholic, Protestant, Muslim or atheist; by whites or blacks.’ As Thomas Sowell put it, ‘prejudice is free, but discrimination has costs.’” (ITCP pp. 126-128)

Inherent in these arguments, I had argued, in 2011, is that, while not untrue, they are incomplete, mere half-truths: …

…“Arguably, however, [our] good economists … are still offering up a half-truth. Rational self-interest does indeed propel people, however prejudiced, to set aside bias and put their scarce resources to the best use. But to state simply that ‘discrimination is bad for business’ [and that a pure, free-market meritocracy would solve the problem of racial underrepresentation] is to present an incomplete picture.” …

UPDATE (6/21/021): I am thankful for having quality readers. My writing has drawn wonderful people; giving, good people. Writes one such soul:

Ilana it’s a very brutal world for someone like yourself. When I said that you are alone, I didn’t mean that in the sense that you are banished to isolation or similar. I meant you are unique, you stand out, have value, yet the many are abject cretins, and will never comprehend you, couldn’t give a damn, and on account of their low level of culture will never encounter the likes of you till the end of time. This does not signify you should cease being the thinker that you are, for you must continue, whenever it occurs to you, to impart your intelligence to us. Your great worth will always find fruition somewhere with someone.

So kind and so soulful and, above all, giving. This is a giving person who really wants to impart strength, where he perceives that it’s waning. And he is not alone. “Musil Protege” is such a gem of a friend. Kerry Crowel, too, and David Vance: what a pro. Online, there are Matt Ray and Dissident Mama: good people who “drop by” to strengthen me and give of themselves.

I hope that these fine people find me as loyal a friend as I find them. 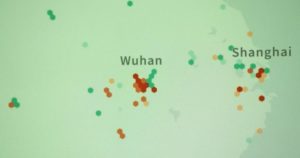 Peter McCullough: The most brilliant, independent thinker on Covid19, speaks with the fluidity of a savant on the greatest failure in American medicine.

Group think gripping Americans, in general, institutionalized, intellectual atrophy and ineptness stopped doctors from doing what medicine had always done: come up with a combination of drugs to treat outpatients, and treat them early, so as to reduce hospitalizations and mortality.

Other than a few thinkers like this man and our friends at the Association of American Physicians and Surgeons, Jane Orient’s org., and America’s Frontline Doctors, nobody could muster an original idea of how to put drugs together to treat the illness early. Not a single innovator, independent doctor, academic medical center; not the venerable NIH or CDC helped a single outpatient. Covid was so obviously treatable within the outpatient paradigm.

Nobody in the medical community (overrun by obedient authoritarian women worriers, not warriors) said, “Do the best you can for your patients with what you have.” If anything, early treatment was suppressed—globally—even criminalized, despite the immutable medical fact that just about every single disease does better when treated. “Wait until you can’t breathe, then go to the ER,” patients were instructed.

Dr. McCullough has published over 40 peer-review papers on COVID alone.

MORE: “Pathophysiologic Rationale for Early Ambulatory Treatment for #COVID19 as an Emergency Response to the Pandemic.”

If you have settled back into those asinine, conservative talking points—“the Left this; the Left that; socialism this; socialism that; we are not racists; they are racists; ‘systemic anti-whiteness’ is the Democrats’ fault”—you need an intervention, S.O.S; you need to pull yourself together, and stop it!

Read the antidote: “Good People Must Be Dangerous People: Fear is the only language the violent comprehend” by Jack Kerwick.

“…Conservatism, Inc.’s leaders are looking out for themselves. Their standard operating procedure is the stuff of wusses and whiners—but certainly not winners. Decent people, and decent men specifically, know that in the last analysis, it is they and they alone—and not, as those in Big Conservatism would have us think, state agents—who are the last line of defense protecting innocents from predators. This being the case, the decent know that they must become ruthless.

… If they were alive today, the founders would insist that decent folks who want to live good lives and protect themselves, their loved ones, and other law-abiding citizens in their communities from danger most definitely not follow the example of “conservative leaders,” whether in government or anywhere else, who are only interested in adjusting their bowties, wagging their fingers, and shrieking and crying over the Left’s ‘double standards’ while conning their constituents into thinking that they are ‘fighting the Left.’””

“Good People Must Be Dangerous People: Fear is the only language the violent comprehend” by Jack Kerwick.