The The Argument from Freedom means arguing process, not content.–ilana

NEW COLUMN IS either “The Wussification Of The West: Will We Ban Shakespeare For Othello And Shylock?” Or, “How Tucker Could Have Crushed His Dr. Seuss Segment,” currently on WND.COM, the Unz Review,  Townhall.com.

“How Tucker Could Have Crushed His Dr. Seuss Segment” is on CNS.News, too.

And American Renaissance, where the conversation is lively.

And, the great American Greatness, the voice of next-generation conservatism.

Watch a video version of this column on YouTube.

… Tucker’s mistake was his contents-driven defense of these kiddie books:

“Dr. Seuss was not a racist. He was an evangelist against bigotry,” pleaded Tucker. “He wrote an entire shelf of books against racism, and not in a subtle way. They were clearly, explicitly against racism. That was the whole point of writing them, to teach children not to be racist.”

Even if Dr. Seuss was the pedagogic, sanctimonious bore Tucker makes him out to be—actual racism in the targeted literature should be a peripheral issue, or no issue at all.

The Argument from Freedom means arguing process, not content.

Whether he intended it or not, the premise of Tucker’s defense of Dr. Seuss is that if we do detect “legitimate” racism in literature—there is a case for banning it. (Now, Tucker might not have meant it that way, but, this is what the structure of his argument portends.)

By contrast, freedom makes the case for an unfettered free market in ideas, good and bad. Freedom argues for politically impolite books to be published and read freely.

Banning books, moreover, assumes a lack of choice and agency among individual human beings. It’s also predicated on a higher authority that decides for the rest of us which cultural products are fit for our consumption.

The Argument from Freedom means arguing not over the contents of Mein Kampf or McElligot’s Pool, but for their publication irrespective of their content.

Which is why I say freedom’s argument is an argument from process, and not content.

Mein Kampf, and any offensive literature, needs to be available in a free society to free men and women who want it. And not because of history; so that we don’t forget it or repeat it (blah, blah, blah, as I heard it enunciated by Seattle’s radio mouth, Jason Rantz, the other day).

Alas, in the face of the cancellation of people and publications, cancelled conservatives just keep these logically weak and, frankly, loser mea culpas coming. Like the Argument from Hitler, which is a kind of “WhatAboutism”:

Tweeted “Musil Protégé”: “Conservatives [inadvertently] condone presentism. As Audrey says in Whit Stillman’s Metropolitan: ‘Has it ever occurred to you that our world judged by the standards of Jane Austen’s time would (look ridiculous)?’”

…NEW COLUMN IS either “The Wussification Of The West: Will We Ban Shakespeare For Othello And Shylock?” Or, “How Tucker Could Have Crushed His Dr. Seuss Segment,” currently on WND.COM, the Unz Review and Townhall.com.

“How Tucker Could Have Crushed His Dr. Seuss Segment” is on CNS.News and American Renaissance as well.

Watch a video version of this column on YouTube.

I’m a big Tucker fan too Ilana. Your article pointing out his arguments along with others who made the same argument give rise to mixed emotions. On the one hand, he (and they) are not wrong. There is some validity to their logic. After all, truth is often multifaceted. Plus, we’re all on the same side fighting side by side as allies in a common cause. On the other hand, you perform a great service when you point out there are far more substantive, powerful, and relevant arguments to be made, reminding me of that axiom, “Great minds may think alike, but greater minds think alone.” It’s why you’ve always been in a class by yourself. Thank you…

No! I point to he fact that the argument from racism is irreverent if one is arguing classical liberal freedoms. Tucker, whom I love, was arguing from the leftist premise. The End. No argument. You can both love Tucker, and agree he presented a weak case for freedom. I do. That’s not wrong.

Ed Powell: “You are my favorite African-American.”
Me: “That’s good ‘adult humor’. I am an African-American Jew.”
MrSweetaz: “@ILANAMERCER, LOL, Hitler wouldn’t have known what the hell to do with you.”
Me: “I think he would.”

Chris Cuomo (white) to Don Lemon (sepia-tinted): “I’m black on the inside“.

Woke Whites are tripping over themselves to be black. It’s called systemic racism: systemic anti-White racism.

Were not people like Rachel Dolezal driven to blackface by systemic anti-White racism? Indeed  they were.

America is not racist. In America, black is beautiful. To be black is to be more righteous, nobler; carry the heaviest historic baggage—heavier than the Holocaust and the Trail of Tears—and be encouraged to perpetually and publicly pick at those imagined, oozing injuries.

Many have assimilated the erroneous thinking about the “racism” construct.

I have written about 4 essays to refute the fallacies.

Political racism is, however, properly deconstructed in these columns:

‘Systemic Racism’ Or Systemic Rubbish?
Was The Cop’s Knee On George Floyd’s Neck ‘Racism’? No!
Ethnocidal ‘Critical Race Theory’ Is Upon Us Like White On Rice
Critical Racist Theory Robs And Rapes Reality

If the reading is hard, I’ve made a series of YouTube videos, which track closely with the essays:

Racism Is A Thought ‘Crime.’ Thought Crimes Are The Prerogative Of A Free People
https://youtu.be/CVyBLLmXVBk

NEW COLUMN is “AOC’s Coven of Spitting, #MeFirst Cobras Comes To Congress” is now on WND.COM, The Unz Review, Townhall.com and the great American Greatness.

The column debuted on CNS.News.

The media scrum framed the Trump impeachment circus, round two, as an “emotional” affair.

Headlines homed in on the “emotion” surrounding the trial. “It Tears at Your Heart. Democrats Make an Emotional Case to Senators — and America — Against Trump,” blared one of many hackneyed screamers, this one from Time.com.

The case made by the managers “was both meticulous and emotional,” came the repetitive refrain.

Democrat Jamie Raskin, a representative from Maryland and a lead impeachment manager, sniffed “emotionally” as he related what to him was a heartbreaking tidbit: His (privileged) daughter expressed fear of visiting the Capitol again, presumably because of the January 6 fracas. That made Jamie cry. And when Jamie Raskin cries, normies outside Rome-on-the-Potomac laugh. Uproariously.

Impeachment managers had warned all present in the Senate Chamber that evidentiary footage would be upsetting. Their presentations were “intentionally emotional,” intoned CNN’s Dana Bash, who had paired up with one Abby Phillips for the “solemn” affair. Phillips’ “coverage” of all things Trump, in scratchy vocal fry, was a reminder that the Left’s “empaneled witches and their housebroken boys are guided more by the spirit of Madame Defarge than by lady justice.”

A lady in an armadillo outfit emoted a lot. She was impeachment manager Stacey Plaskett. Although not particularly fashionable or feminine, there was a ton of “emotional” praise on the Internet for Plaskett’s attire. Armani’s armadillo apparel was certainly a preferred distraction to the decibels of weepy rage emitted over the Trump protest.

The “intentionally emotional” affair, the last impeachment trial conducted by the Senate, had been preceded by an even more “emotionally” bizarre “healing” coven in Congress, led by the representative from New York, one Alexandria Ocasio-Cortez.

Ocasio-Cortez set up an hour-long primitive, ritualistic session conducted, putatively, to purge the pain over the January 6 protest on the Capitol.

Early in February, a coven of “prominent Democratic lawmakers, including Reps. Ayanna Pressley (Massachusetts) and Rashida Tlaib (Michigan),” joined Ocasio-Cortez in forcing such a session, with the aim of “creating space for members to talk about their ‘lived experience’” during that Capitol Hill riot.

Big League Politics, a news website, was incredulous, reporting that “congress [had] devolved into an AOC-led therapy session,” during which “House members cried while detailing their ‘lived experiences.’”

This American “thought” leader, Ocasio-Cortez, and her “harrowing” ordeal dominated the corporate press as well.

Here are some of the histrionic headlines as to what befell Congress’s queen of #MeFirst solipsism.

See if you can spot the operative word that animated the writers’ impoverished text:

NEW COLUMN is “AOC’s Coven of Spitting, #MeFirst Cobras Comes To Congress” is now on WND.COM, The Unz Review, Townhall.com, on CNS.News, and the great American Greatness.

Brooke Baldwin, you will never be, as you boast here, “innovative, creative, or [an agent for] change.” Never.

To deploy the idiom of the Bell Curve distribution, Brooke seems to me to be the Mode, the most common value in a set, her opinions and range of ideas falling comfortably with the most frequently occurring among her tribe.

Baldwin is an ego in an anchor’s chair. She has shown herself over the years to be indistinguishable from the condescending, arrogant cretins with whom she has worked. Now she has an announcement so important that she tells all. After all, she is not merely a cog in the CNN org … 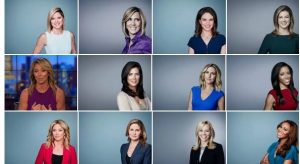 If you doubt what I say, here is the Barely-A-Blog Brooke Baldwin dossier of dastardly positions and poses, such as when the “humorless CNN anchor berated Border Patrol for joking with sainted, separated kids.”