NEW COLUMN is “The Hell With Hunter; Call Joe In For Hearings On Treason, Cancel The Neocons While You’re At It.” It is featured on The Unz Review, WND and The New American on Friday.

The Republicans are investigating the Hunter “Baaaden” affair, to imitate the repetitive intonations emitted by Fox News’ Australian journalist, about the ‘Baaaden’ laptop.

Deplorables, don’t be misled into this dummies-and-ditto-heads dead-end. This is vintage lightweight, GOP tit-for-tat distraction, on par with the Democrats’ ongoing January 6 production.

The Hunter Biden preoccupation amounts to, “They (Democrats) do January 6; we (Republicans) hack away at—or hit back with—Hunter Biden’s laptop from hell.”

The outcome: The Democrats get what they want: détente. They neuter Deplorables, sending us down a political rabbit hole.

We gain nothing from such a foray. It’s zero-sum for Deplorables.

Legal scholar Jonathan Turley, whom I respect, disagrees. Turley, understand, operates within the philosophical parameters of the state. By and large, he believes in the extant integrity of American institutions, even confident that one party is more righteous than the other. When out-of-sync, the good party led by the right people, or so the good professor imagines, is sure to right wrongs through a congressional committee.

Wrong. Not for nothing do we call it the Permanent State, fronted as it is by evil and stupid-party operatives.

Correctly so, the matter of the FBI’s endemic corruption and bias has been settled both in the minds of deplorables and by the objective facts. (FBI Director James Comey anyone? Director Christopher Wray?)

If the GOP were seriously working for Deplorables, and not engaged in tit-for-tat political gotcha—they’d pursue First Principles driven congressional oversight.

Duly, Biden would be summonsed for a hearing charging that by intentionally, and as a matter of policy, leaving the Southern border wide-open and unguarded—in effect inviting the world to invade our country—the president is willfully flouting his constitutional obligation to protect Americans from foreign invaders, and is thus committing treason.

The obligation of a Republican congressional majority is to pursue oversight by investigating and prosecuting a flagrant violation by the president of his constitutional obligation to defend the United States and its people from foreign invasions.

That the incoming Republican congressional majority is already falling flat, opting for showy politicking, instead of a solemn focus on Biden’s treason against his people, is all the more jarring given the GOP’s abject failure to deliver as promised in the 2022 midterms.

Other predictably ominous signs were on display at a recent Republican Jewish Coalition conference, where some Republicans who ought to disappear reappeared …

… THE REST. “The Hell With Hunter; Call Joe In For Hearings On Treason, Cancel The Neocons While You’re At It” is featured on The Unz Review, WND and The New American on Friday. 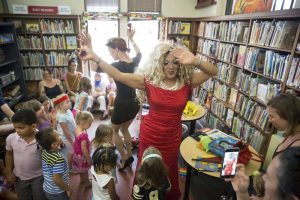 MY NEW COLUMN is “Say It! The DemonCrats Are The Party Of Perverts.” It appeared on The Unz Review , The New American, and Townhall.com.

Say It! The DemonCrats Are The Party Of Perverts

LinkedIn, an ossifying excrescent of the rotting Microsoft org, promptly removed this column—title and link—from its pages.

Intended as a passionate, patriotic attempt to sway last-minute voters, one expects such a column as Party of Perverts to be hastily canceled on such progressive Left portals as LinkedIn. For the tentacular Left controls what I’ve termed the intellectual means of production.

But, as other dissidents have noted, it is from our own side that the shivving is most disquieting and ever unexpected (because irrational). Why would “The Party of Perverts,” which puts the DemonCrats in perspective for those who have not conceptualized properly about them, be kept off a conservative site serious about making a case for our side at the 11th hour?

Just because. MANopausal moodiness, a power-play, ego, one-upmanship: As I’ve learned over 23 years—occasionally, spontaneously, and unprovoked; ego-bound, moody, petty minded men like to show Mercer who is the boss in their grubby little domain.

Suffice it to say that this column might have reached many more undecided voters if not for perennial, spontaneous, malevolent pettiness with which this writer has had to contend from OUR SIDE for over 2 decades.

…The Democrat platform is, one that promises to end Anglo-America, welcome the world, evict the unborn as a constitutionally enshrined right, while sundering the Bill of Rights and reveling in all manner of evil, criminal and carnal. …

… The Democrats have only normalized and streamlined their dystopian operation. This is a party that stands for loosing robbers, rapists, killers and perverts on the land.

And not nearly enough is said about the DemonCrat’s sexual politics.

… The imperative is to define the Democrats as the deviants they are. Demons. Demented. Yet Republicans, miss the mark and slide into extenuation: They call the Democrats “radicals,” their agenda a “radical one,” when the Democrat party is in fact the party of perverts. …

… To label Democrats as radicals is to compliment them. I’m a radical reactionary; a radical for free-speech, a radical for property rights, for localism, for individual liberty. See what I mean? The “radical” adjective is not necessarily pejorative.

… READ ON.  Published on The New American, The Unz Review and on Townhall.com; find “Say It! The DemonCrats Are The Party Of Pervert” now on IlanaMercer.com.

All columns are eventually posted on IlanaMercer.com, under Weekly Column.

UPDATE (10/29/022): Our side, moreover, may wish to  remind itself that the DemonCrats are running on a “platform” calling 80 million people insurrectionists; racists, misogynists, xenophobic trash. They mean it, you fools; they’ve gone after demonstrators and MAGA leaders—some of whom are in jail—with warrants and subpoenas. They’ve sicced Deep Tech on us. They’d go after all of us if they could.

NEW COLUMN is “A Society Of Deviants Sanctions Onanism With An Infant.”

An uncluttered mind is needed to see this issue clearly. Hence this short tract has so far appeared only on the inimitable Unz Review and The New American.  Read it now on ilanaMercer.com.

My analysis has come as a shock to our side. Let me put it to you thus: In the olden days, if a church elder had stumbled upon a flat-chested girlie-man fixing an infant to his man breasts; there would be a public flogging, if not excommunication. By which I mean not necessarily to condone these punishments in all instances (although I generally approve of public shaming)—but to point to the reaction of the unpropagandized mind to kinky perversion.

… Is this man-woman, then, engaged in the “natural” act of breastfeeding, or is this something far more sinister like a sexual experience? Is this not tantamount to titillating oneself, using the baby to get-off?

Since the deviant described in the article and discussed in the podcast “Bearded Men Breast Feeding In Public: Paternal Or Kinky?” is not sustaining the infant – is not a successful breast-feeder, as the well is dry – and since, by self-admission, the person’s main project is his/her gender identity, I suggest this character is deriving unacknowledged sexual pleasure from fixing a child on to his secondary sexual organs.

The baby here is a prop. The breast feeding is near-sexual. And a society of deviants is sanctioning onanism with an infant: A grown man here is likely using an infant to pleasure himself. An infant has no agency, hence onanism. …

… READ the rest on  The Unz Review and The New American. Read it now on ilanaMercer.com. 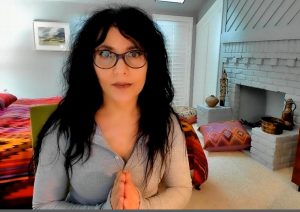 UPDATED (7/9/022): A reader at the Unz Review asserts that women too get aroused during legitimate breast-feeding. Ridiculous. Sick. If so, disgusting distaff says I!

All I remember is a motherly-baby cocoon, where my child would occasionally quit nursing voraciously—these gender-identity perverts forget that a child nurses to survive, sate hunger and grow—to smile, play with my hair, burp. Magic bonding time.

What I remember of the breastfeeding experience is a mother-baby cocoon, with baby occasionally taking a break (these gender-appropriators forget that a baby nurses to survive, sate hunger, grow) to smile, play with my hair, burp. This is a much better formula for mother-child bonding than baby formula.

“That is one of the sweetest descriptions of the mother & child bonding experience I’ve ever read. Nothing prurient at all. Just love. The hair part got me,” writes Musil Protege Some people have soul. 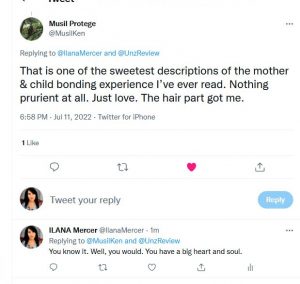 “A Society Of Deviants Sanctions Onanism With An Infant” (Updated version)

NEW: DAVID VANCE AND I GET WORKED UP ON THE NEW “HARD TRUTH” PODCAST: “Save Your Kids–Get Them The Hell Out Of US Schools!”

The Stupid Party says, “Just arm the teachers.” You want to train and arm teachers and faculty staff members to protect your kids? Have you seen what falls under the category “teacher” and faculty? Seen the people who zealously inculcate ungrammatical pronoun illiteracy? Who promote and entrench anti-white racism and exotic age-inappropriate sexuality? Have you seen these mountains of flesh videoing themselves gyrating obscenely, sexual exhibitionists caught in flagrante delicto? The same “dedicated” pedagogues who took two years off for COVID?

US schools, incidentally, are well capitalized. They have active-shooter training and security protocols in place. What they don’t have is decent human capital.