I never though I’d say this, but, if one is wedded to reality as I am—there is a place for Benthamite utilitarianism, however much natural-rights sorts like me dislike Jeremy Bentham’s reasoning.

AT ANY RATE, A LETTER IN RESPONSE TO THE YOUTUBE VIDEO I RECORDED TODAY elicited this rather utilitarian reaction from me. (I lost the letter in the posting-and-replying activity, so perhaps the viewer and writer, a critic, will be kind enough to repost it here at YouTube.)

Having covered and commented on this crisis since 2014, I will repeat the plain reality the commentary was supposed to convey and elucidate:

Ukraine is the little guy. As those Biblical examples offered were meant to vividly illustrate; the Little Weak Guy must deal with reality; not bolster his hero bona fides. For Volodymyr Zelensky, dealing with reality and discharging his duties as a leader ought to have meant engaging with Putin personally and respectfully long before the invasion.

HE CATEGORICALLY DID NOT. Instead, he played footsie with fickle America and kept baiting the Russian Bear. Now his people suffer. That’s a FAIL. The End.

“It’s Biblical, Zelensky: A Leader Who Fails To Negotiate For The Lives Of His People Has Failed”

Please Subscribe to the “Hard Truth” Video Podcast, where Ukraine has been covered (and which I enjoy much more than “speaking solo to the camera“):

Peace to all—especially to the poor Ukrainians, failed by the US and by their US-co-opted leaders.

Studio 54 groupie Margaret Trudeau: Is she even wearing underwear? 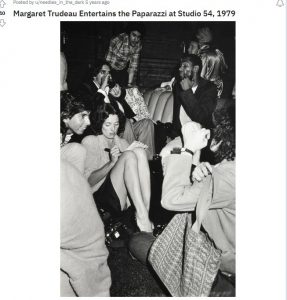 Just look at his mincing stride, the vain coif, the pasty, doughy face and hollow stupid eyes, like those of his mom, Margaret.  Justine Trudeau was practically conceived and raised at the debauch Studio 54. This scumbag is telling the salt of the earth, the best of Canada, Truckers For Freedom, to turn tail and go home, as he continues to treat them as second-class subjects.

Today, I shared a clear message to those taking part in illegal blockades and occupations: We’ve heard you. But there are consequences for breaking the law, and those consequences are becoming increasingly severe. It’s time to go home to your communities. pic.twitter.com/o6RyoxD46O

UPDATED (2/12): I updated the title of this post with the moniker “Spawn Of Studio 54.” I am assured by a Canadian compatriot that indeed, my assessment is correct: Justine’s mother Margaret was a total groupie.

It matters not that the few “Republican governors crusading against vaccine mandates are [allegedly] facing significantly lower approval ratings on their handling of the coronavirus pandemic than their counterparts,” as purported by Politico. (I don’t believe Politico.)

What matters is that governors like Texas’ Greg Abbott, who “flat-out banned vaccine requirements, and Florida Gov. Ron DeSantis followed up by vowing to sue the Biden administration.” These two are upholding, natural, inalienable, individual rights—the right of self ownership, bodily dominion, the stuff mocked by Joe Biden thus:

During the event, moderator Anderson Cooper asked Biden his thoughts about reports of emergency responders in different cities refusing to comply with city vaccine mandates. Cooper asked Biden whether he thought such workers should be fired, encouraged to stay home or be allowed to keep their jobs.

Were our representatives to frame the issue of vaccine mandates in the correct language of natural rights, namely bodily autonomy, self-determination—we’d get the right answers, more likely to be followed by rights-upholding legislation.

When it comes to Covid-19, only the following arguments are permissible as an objection to the Covid vaccine mandate. “Exemptions from employer-mandated coronavirus vaccines [are] in [these] three general areas“:

And one hears support for outcome-based coercion because it  works; rights-violations work. This latter argument is a scandal:

Leana Wen, an emergency physician and public health professor at George Washington University, said she approves of the administration’s push for employer-based mandates because “frankly nothing else was working.”

As an objection to the Covid vaccine, nowhere is a rights-based argument or an argument based on the right to question the safety of the vaccine being advanced by the idiots who represent us. “Exemptions from employer-mandated coronavirus vaccines are in three general areas” only.

In other words—and, as per this typical Candace-Owens, Republican-type dumb argument—blacks are righteous in protesting the violation of their bodily integrity via #vaccines. But NOT whites, bc whites have not suffered historically like black. #GOP, RIP. https://t.co/bpXHgaH3rV

The structure of this typically Republican, Candice Owens-type "argument" is nailed by @RichardHanania. Accordingly blacks are justified in their skepticism of the #CovidVaccine. The argument made by this Republican mouth cuts whites out completely; leaving them in the dark https://t.co/3sTf87VUfG

Ok, @TuckerCarlson: The ineffectual #JoshHawley agrees the American people, whatever that means, should not tolerate criminal aliens #raping women on trains. What does the #GOP ever do about anything? #FistonNgoy & his kind have been here forever.https://t.co/cLjBl0DWr7

#CivilRights attorney #HarmeetDhillon
@pnjabanr reveals that the #GOP (RIP) has, over decades, facilitated laws the outcome of which is the current #COVID corporate tyranny: This fact needs the widest, loudest publicity: Biz is allowed to reject employees based on vaccine status

Exactly. Enough cheering for the ineffectual GOP and its front men and women, who arrive in Rome and do nothing–decade after decade. Oh, yes, they make appearances on TV, get lucrative book deals, and consolidate political and corporate power for a lifetime https://t.co/Ky2pANJpMf

Thank Trump for being the first GOP president in recent memory to do his bloody job and appoint justices who uphold the Bill Of Rights:

Natural rights antedate the state apparatus. It matters not who restores or upholds authentic negative, individual rights violated—state or federal authority—just so long as someone does.

So, “Texas Gov. Greg Abbott’s executive order banning vaccine mandates in the state” is the correct thing to have done.

The entire legal community knows only the positive, state law, and cares nothing for the natural law, meagerly embodied in the Bill of Rights. This is why all “legal experts” are quite pleased to defer to the  Supremacy Clause abomination—it allows the State to subordinate  your natural rights as an American to the UN—in dismissing Abbot’s move.

Abbott’s move puts him at odds with some large corporations and with the Biden administration, which last month announced plans to require all employers with 100 or more workers to adopt vaccine mandates or testing regimens. A number of large private companies in Texas have issued mandates. (WaPo)

…the supremacy clause to the Constitution says that federal law is the ‘supreme’ law of the land, and state laws give way to it” …. “The state mandate is of no effect in that case.”

“The Constitution is the thin edge of the wedge that has allowed U.S. governments to cede the rights of Americans to the UN. Specifically, the ‘Supremacy Clause’ in Article VI [even] states that all treaties made by government shall be “the supreme Law of the Land,” and shall usurp state law. Article VI has thus further compounded the loss of individual rights in the U.S.

Unless Abbot stands his ground (metaphorically, because the governor is wheelchair-bound).

Too hell with the Constitution; nobody follows it anyway, least of all the lawless, no-borders, White Lives Don’t Matter, licentious Democrats.