Tucker Carlson does splendid work from his mainstream perch, but because of his philosophical limitations and many blind-spots—the kind that had him join the neoconerie in killing Iraq, in the first place; the kind that saw him laud the murder of Iranian major general Qassim Soleimani; the kind that has him bash The South; and call on Canadian truckers to prove a negative, namely, that they aren’t racists; the kind that whined, whined, whined non-stop about Harvey Weinstein, in effect talking-up the MeToo fraud—he stumbles all the time. All the time. Without fail.

Thus did I urge ideological caution on a good friend who got carried away in giving too much street cred to Tucker, and, by extension, enthusing about a Tucker-endorsed Iranian warmonger, Sohrab Ahmari, who has reinvented himself and now peddles retread banalities (or stuff the Old Right—myself included—had espoused decades ago). At best, Ahmari, this ex-agitator for war in Iran, is an unoriginal second hander.

The Saudis, explained Tucker, are angry with the awful Biden Administration over Iran and the war in Yemen. I imagine Biden is perceived by the Saudis—and ConOink—to be insufficiently belligerent about destroying Iran, a longtime mission the Saudis share with the neocons. As is Biden considered to be unhelpful to the Saudis in his impetus (albeit weak) to end Saudi Arabia’s protracted war on an impoverished Yemen.

Both these Biden positions, as limp as they are, are better than the positions adopted by ConInc and, yes, Trump. The Saudi war on Yemen is a scandal. 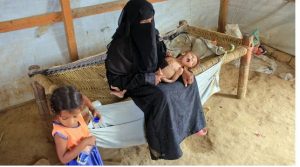 Likewise the unchanging agitation against Iran.

The Shrub, as George Bush was called during the heyday of his destructive powers—and having destroyed a country or two and caused the deaths of hundreds of thousands of Iraqi and Afghan nationals—now turns on Americans. Proper:

… we have seen growing evidence that the dangers to our country can come not only across borders, but from violence that gathers within. There is little cultural overlap between violent extremists abroad and violent extremists at home. But in their disdain for pluralism, in their disregard for human life, in their determination to defile national symbols, they are children of the same foul spirit. And it is our continuing duty to confront them. …

In the words of Andrew Breitbart: “Fuck you. War.”

UPDATE I: Genghis Bush (corrected the title) was talking about the January 6 Trumpsters or “the sixers,” as Musil Ken calls them. Not in a million years would I have imagined that any America Firster would misconstrue this evil man to be defending Robert E. Lee and the like. Our side is hopeless if someone thought thus.

UPDATE II: For heaven’s sake; when Genghis Bush laments the destruction of  “national symbols,” he doesn’t mean confederate or other historic monuments; he means The State; Uncle Sam; The Ultimate Predator.

* Image courtesy of “The Spoof.”

I had suggested that this falls under the rubric of “Systemic, Institutional Rot,” in a column on the Big Freeze in Texas, fires in California, colliding trains on land and Navy vessels at sea, and hey, a pedestrian bridge has already collapsed in Florida.

The Sheikh over in Dubai hires top talent that knows how to ensure that the ground can support the structure before proceeding to build upon it. (My thanks to Sean for this interesting juxtaposition.)

“A pancake collapse, such as at the oceanfront condo tower in Surfside, Florida, is a ‘progressive failure’ that often begins at the bottom: A load-bearing element is damaged, usually in a building’s lower floors or foundation, which triggers the top floors to collapse vertically into the floors below, said Necati Catbas, a professor in the Department of Civil, Environmental, and Construction Engineering at the University of Central Florida.” (CNN)