The better responses on Facebook to this indubitably crass indictment of the feminized society harped on the mistake of collectivism in reasoning. 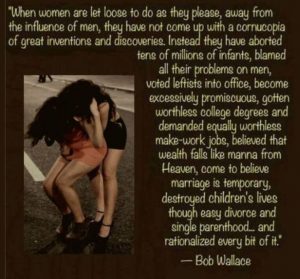 In aggregate, however, this seemingly obnoxious statement attributed to one Bob Wallace (?) is still largely true. For, from the fact that vast individual differences exist between people—and that there are many magnificent women—it doesn’t follow that one cannot make accurate aggregate statements about groups of individuals.

This is, very plainly, the basis of science: deductions about the aggregate characteristics of representative samples. Maybe not the most comprehensive definition, but you get my gist.

A priceless excerpt from Norah Vincent’s book comes to mind. Its title is self explanatory: Self-Made Man: My year Disguised as a Man.

Vincent, a lesbian in her regular life, describes dating women while disguised as Ned:

“I listened to [the women] talk literally for hours about the most minute, mind-numbing details of their personal lives; men they were still in love with; men they had divorced, roommates and co-worker they hated…. Listening to them was like undergoing a slow frontal lobotomy. I sat there stunned by the social ineptitude of people to whom it never seemed to occur that no one, much less a first date, would have any interest in enduring this ordeal …”

Seconded in my VDARE.com article, “The Silly Sex?”:

UPDATE: A man’s work: Corralling logs with a boom boat. How can one fail to be impressed by the strength, skill, calm and staying power this job takes? To do all this competently and single-handedly? Mike Row’s show is genius in what it shows.

The MeToo ingrates should take note, too. Ukrainian men between the ages of 18 and 60 are currently prohibited from leaving the country. Drafted. This is what men have been doing stoically and dutifully for centuries: defending the women folk. (Who gets drafted is another matter. Read “Support The Drafts.…”)