“I think it’s possible’ Trump is a Russian asset.” So said former acting FBI Director Andrew McCabe to a friendly interviewer (is there any other kind?).

That’s very funny. President Trump is so not spy material. Donald Trump would be a liability if recruited in spook capacity. He’d be tweeting out all Putin’s secrets.

McCabe’s nutty utterances tell you how stupid he is—and how compromised the FBI has become. I mean, McCabe was a big cheese in the org. He was a top dog there. 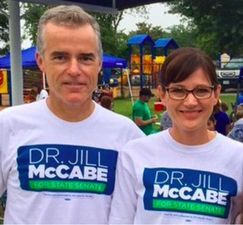 In any event, for those who do not recall, pursuant to the Office of the Inspector General’s (OIG) recommendations, McCabe had been fired for making “an unauthorized disclosure to the news media and lack[ing] candor,” including to lie under oath on multiple occasions. (HERE.)

“The FBI expects every employee to adhere to the highest standards of honesty, integrity, and accountability. As the OPR proposal stated, ‘all FBI employees know that lacking candor under oath results in dismissal and that our integrity is our brand.’”