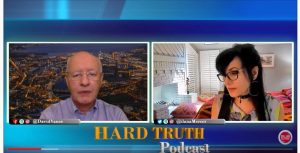 UPDATE II (8/13): Check out the noisy letter exchanges for this YouTube. My replies:

Dissidents had been fighting authoritarianism when Douglas Murray was still in short pants. Wishy-washy and anti-Trump, Murray, who penned a book FOR Neoconservatism and has been establishment Con. Inc. forever, had, on October 8, condemned the Alt Right on Tucker Carlson Tonight.

We disagree. Murray had not 1 thoughtful idea @TuckerCarlson. Example: He repeats #BigTech "is not up to the task" of policing speech. Premise: Someone is up to the task of censorship. PURE error of reasoning & ethics. MORE:https://t.co/QIaRBkyVua &https://t.co/5qo8Hbi7kT https://t.co/hAzlpnQx6e