Despite the fact that conservatism conserves nothing—CONSERVATION IS CONSERVATIVE. It ought to be our cause

There goes the conservative idiocracy. Everywhere you look conservatives are rejoicing that world population count hit 8 billion. Population explosion is to be celebrated! More, more, more people. It’s only good; never zero sum, for resources are endless. Animal life and habitat? Who cares? Kill ’em. Good for nothing. Deforestation? Bring it on. Forests are overrated. And, after all, the most populated places on earth are also heaven on earth. Oh, for the glories of Calcutta, Cairo and Gaza, coming to your little hamlet.

From their vantage point, cultivated usually from the serenity of their stately homes, advocates for over-population could use the utilitarian arguments of the open-border crowd, who tout the advantages of high-population density. Apparently, Mumbai and Manila are models for the specialization that comes with an increased division of labor. However, if American history (circa 1894) is anything to go by, the scarcity and high cost of labor helped propel this country into its position as the world’s leading industrial power. These factors, historian Paul Johnson has observed, “[G]ave the strongest possible motive not only to invent but to buy and install labor-saving machinery, the essence of high productivity, and so mass production.”

This conservative celebration of the 8 billion is obscene. It conjures one of the more profound—but contradictory—pieces by Tucker Carlson, discussing the concept of “community”. Millions-upon-millions of people can never form community, said he, wisely. Too much. Too big. All the more so when they do not cohere and do not instantiate those Burkean little platoons.

For gigantism is the opposite of community. Only small is community. Small is beautiful. And here Mr. Carlson contradicted himself and his achingly beautiful sentiment: He loves population explosion. Every baby born is a gem. Contradictions, contradictions.

By the numbers, and so you know: In celebrating overpopulation—conservatives are calling for the Third World to be fruitful and to multiply. Own it!!!

“For Wildlife and White Men the end maybe nigh” by Hannes Wessels:

… “With Europeans on the ropes the future for wildlife and the natural environment in Africa has probably never looked so bleak. As far as the continent is concerned we live in a world that has allowed the human population to multiply without control and all other forms of life simply suffer the consequences…..population growth is logarithmic and unsustainable ..”

No mention any longer is made by progressives of ‘planned parenthood’ or ‘family planning’ for the 3rd world because that might be considered ‘racist’, aimed at reducing the number of Africans and other peoples in in the Third World. … Conservatives are no different.

HOWEVER—and despite the fact that conservatism conserves nothing—CONSERVATION IS CONSERVATIVE. It ought to be our cause.

If you are celebrating population explosion please spare us the pretense at spirituality and love of nature and the outdoors. For your actions are phony. Rudderless. They amount to a performative contradiction.

And, if you visit this space expecting rote conservative positions, or textbook libertarianism; you won’t find these. You will find the truth. I suspect that new-generation conservatives are not necessarily on board with the old school’s fill-the-oceans-with-plastics and kill-everything-that-moves gang. UPDATED (7/30/022): Yes, since conservatives always tinker at the margins, they are picking on Il Duce Trudeau not for trashing the Canadian Charter of Rights and Freedoms, but for not wanting to trash the environment with plastic cutlery. To coincide with the ocean currents, every one of our oceans has gyres of garbage (much of it plastic), as big as Texas. Much of the plastic is single-use plastic, the stuff for which conservatives reserve the “best” of philosophical defenses. 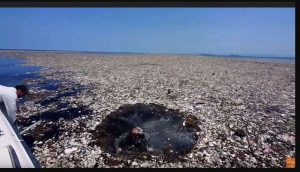 4 thoughts on “UPDATED (7/30/022): The Pall Of Humanity’s Blanketing God’s Green Earth, And Conservatives Are Loving it”