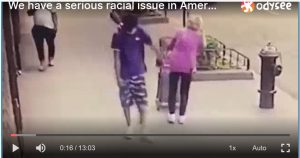 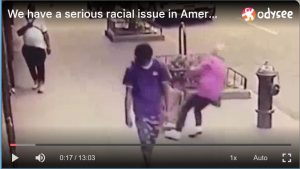 For every hate crime unidentified making its way into the news under a phony guise, there are countless, daily, black-on-white beatings and acts of bullying in public spaces.

In October alone, there were “32 black-on-white homicides, including five home invasions,” as chronicled on The Unz Review.

Institutionalized rot means that the feral folks have been put in charge, empowered to say and do as they feel. They are fearless. They want to smash all faces that aren’t like theirs. And they’ve been given institutional imprimatur to act out on their envy and hate. A combination of low inhibitions and license to kill has resulted in scenes like these across the country.

This comes courtesy of Ziggs on Odysee:

Then there are the parents. Likely race-related, the murder of this typical innocent do-gooder, Ethan Williams, was masked by media and law enforcement  as a “stray bullet.”

Kids like Ethan are sent into the world wide-eyed and filled with only wonderment. (Read “Sacrificing Kids To PC Pietism,” 2011.) Nary a warning are they issued as to the reality of crime in America—and beyond. Parents are instrumental in these tragic events, having never given their kids “The Talk,” as John Derbyshire called it.

As a neighborhood in which to bunk down, Ethan Williams chose Bushwick, in New York City. Bushwick is known as dangerously and diversely hip. Was this reckless decision not made against the background of a lifelong familial support and backing for such displays of hipness and “openness”?

Pater says the kid was all about “poverty and violence” and “mission work in Rwanda” (as opposed in white, impoverish Appalachia).

Writes his proud father, who seems to have helped cement this delusional, progressive-Christian ideation in his kid’s mind:

Police believe our son’s killer mistook him and his friends for rival gang members. [Yeah, right]. They were instead just a group of Midwestern boys on their first trip to see “the greatest city in the world.” If he had been given the chance, without question Ethan would have embraced his would-be killer, asked his name and hung out on those same steps with him swapping stories deep into the night.

6 thoughts on “Of Course Their Race Counts; It Got Them Killed”