Joe Biden is right in his “Remarks on Afghanistan“: “… if Afghanistan is unable to mount any real resistance to the Taliban now, there is no chance that 1 year — 1 more year, 5 more years, or 20 more years of U.S. military boots on the ground would’ve made any difference.”

Tempting as it may be for right-thinking conservatives and paleolibertarians, in particular, to use the inevitable collapse of the charade in Afghanistan against Biden—honesty demand we avoid it.

TV Republicans, no doubt, will join the shrill CNN females and their houseboys, who love nothing more than to export the nanny state, in bashing Biden for his decisive withdrawal. The president said, “I stand squarely behind my decision. After 20 years, I’ve learned the hard way that there was never a good time to withdraw U.S. forces.”

Falling into the Republican line of partisan, tit-for-tat retorts is wrong. The man made the right choice—as opposed to Barack Obama’s. Afghanistan was a war Obama had adopted.

Beware especially the military men, who will flood Fox New with the sunk-cost fallacy. As I explained in “GOP Should Grow A Brain, Join The Peace Train“:

Military movers and shakers are heavily vested in the sunk-cost fallacy—the irrational notion that more resources must be committed forthwith … so as to ‘redeem’ the original misguided commitment of men, money and materiel to the mission.

“To that end, repeated ad nauseam is the refrain about our ‘brave men and women of the military,’ whose sacrifice for [Afghani] ‘freedoms’ will be squandered unless more such sacrifices are made.

The Skeptic’s Dictionary dispels this illogic: ‘To continue to invest in a hopeless project is irrational. Such behavior may be a pathetic attempt to delay having to face the consequences of one’s poor judgment. The irrationality is a way to save face, to appear to be knowledgeable, when in fact one is acting like an idiot.’

Besides, it’s time the military heed its paymasters, The American People, a majority of whom don’t want to send U.S. soldiers back into Afghanistan.”

NEW COLUMN IS “South Africa Shames U.S. Democrats By Uniting Against Criminality.” It is currently featured on WND.COM, The Unz Review, CNSNews,  Townhall.com and American Renaissance.

I expect to see the column in Junge Freiheit, a German weekly of excellence, which published my column for some years.

This column is quite a departure from my usual gloom about my homeland. However, when juxtaposed against the pervasive degenerate moral tone set by progressives in the USA—South Africa stands out positivity.

As I said in the column’s coda:

“For everything there is a season under the heavens,” Ecclesiastes teaches. “A time to break down, and a time to build up.”

Now is the time to comfort, praise, and build the beloved country up.

… in 2020, America erupted in race riots. Cities across the republic were sacked, citizens left defenseless. The camera panned out across the country to reveal policemen and guardsmen caving.

Against the backdrop of “Mad Max”-like dystopian destruction–a portend of things to come–American men in uniform all collapsed to the pavements like yogis to the command of their black tormentors. Bringing in the feds was a must since the protection of individual natural rights trumps federalism. However, while the national guard was galvanized, the cavalry was sent to race-riot hotspots to protect not the citizenry, oh no, but federal property.

As bad and as broken as my poor former homeland is, South Africa’s ruling elites came out with powerful declarations of shared moral values. There was no blame game–no allusion to systemic racism. The system of apartheid was not conjured from the past as causality for criminality. Whites were not demonized as the Evil Other. Over 2000 criminals have hitherto been arrested and 117 killed, I imagine, some by cop. Five thousand soldiers are already on the ground.  …

… By the thousands, South African authorities have been arresting rioters, not right-wingers. Stateside, the Federal Bureau of Investigation is proceeding energetically not against our BLM domestic terrorists, but against Trump-voting Deplorables…

… whereas riots make “Sippy Cup Joe (Biden)” weep for the rioters and wail for police reform, not for policing the rioters–Ramaphosa has sent a clear and moral message: “We will stand as one people, united against violence, unanimous in our commitment to peace and to the rule of law.” …

Smart readers welcome nuance, in general—and, in particular, from a writer who has been way ahead of them and their favorite talkers and merciless regarding South Africa for over a decade!

Can't expect @TuckerCarlson to get it, because he knows nothing about Old #SouthAfrica. But neither does his "authority," #ErnstRoets. Roets is so Americanized in thinking that he doesn't realize that what I called the "Afro-American multicultural society" originates in the USA!

The South African multicultural, globalist society, with affinity for nothing more than McDonald's and the mobile phone is modeled after the USA!!! #ErnstRoets, #FoxNews expert, is clueless. Get some brain power like @DanRoodt, @TuckerCarlson https://t.co/dccVjUZYw4 https://t.co/JJhvbMJ2ka

Words here would be superfluous. Images paint a thousand words, none of them including the words male hormone. The ladies want in. Compared to the armies of our possible adversaries, the US military is high on the Disney quotient and low on testosterone:

US Military Ad: If you just dream it, girl …

UPDATED I (5/18): ‘Kim Philby of Wokeness’: It’s Tucker Carlson’s moniker for narcissist, me-me CIA, cisgender, intersectional, millennial agent, with anxiety disorder: “I am a woman of color.”
“I am a cisgender millennial.” “I am intersectional.” I am “brilliant” too.

'Kim Philby of Wokeness': It's @TuckerCarlson's moniker for narcissist, me-me #CIA, cisgender, intersectional, millennial agent, with anxiety disorder: "I am a woman of color."
"I am a cisgender millennial."
"I am intersectional." I am "brilliant" too https://t.co/Hli5yi5vuP

History Of How Estrogen In The US Military Drained It Of Necessary Testosterone #GIJane #USMilitary #WomenInCombat https://t.co/FgomCb5kE8

I wonder if “big, bad” Putin tells the young grunts in Russia’s army how bad they are because so lily white? Rhetorical! Must be nice to be a soldier in an army in which white is not a blight. 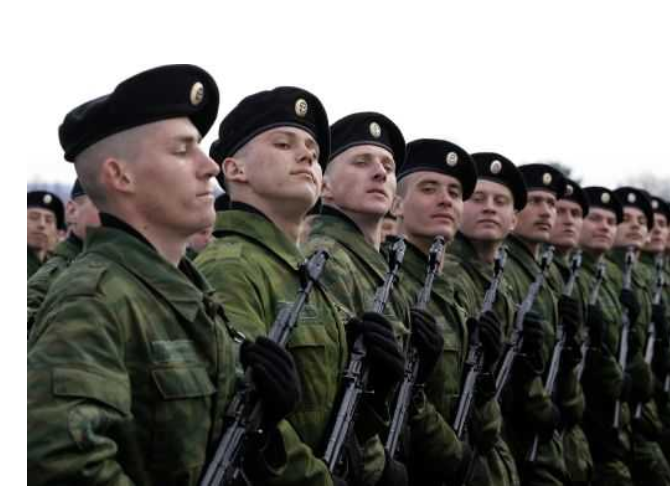