NEW COLUMN IS “Uvalde Cops Come A Cropper: Evil In Action.” It was featured on WND.COM, The Unz Review, CNSNews, American Greatness and The New American. Read it now on ilanaMercer.com:

The Stupid Party says, “Just arm the teachers.” You want to train and arm teachers and faculty staff members to protect your kids? Have you seen what falls under the category “teacher” and faculty? Seen the people who zealously inculcate ungrammatical pronoun illiteracy? Who promote and further entrench systemic anti-white racism and exotic age-inappropriate sexuality? Have you seen these mountains of flesh videoing themselves gyrating obscenely, sexual exhibitionists in flagrante delicto, under whose tutelage “sexual curiosities, once called perversions, flourish”? Give guns to the same “dedicated” pedagogues who took two years off for COVID?

American schools, incidentally, are well capitalized. They have active-shooter training and security protocols in place. What they don’t have is decent human capital.

What was it that Oscar Wilde said about kindness? “She thought that because he was stupid, he would be kindly, when of course, kindliness requires imagination and intellect.”

NEW COLUMN IS now on ilanaMercer.com.

The images appended are of nonbinary teachers—I honestly don’t know what that means; I never familiarize myself with illogical, perverse concepts that rape reality. The only sensible thing about the lady teacher with the beard is the heel.

Wanna arm this creature? What is it? Stupid, first and foremost. Deeply stupid. https://t.co/q1JK9zF2cU

NEW COLUMN  IS “U.S. Cancels Countries, Kills Ancient Concept Of Neutrality.” It is now featured on WND.COM , The Unz Review, The New American, CNSNews. and American Renaissance, where “Ukrainian Refugees and Race” as a “Look-Away Issue” was the focus.

… what do you know! Some countries have opted for political neutrality in the Russia-Ukraine conflict, choosing the classically liberal position—it opposes sanctions, as these are as useless in achieving political ends as they are ruthless in their effects on the most vulnerable. As far as their ultimate outcome—embargoed are counterproductive. What works is high-level diplomacy.

Chief among the countries that wish to remain politically neutral toward Russia and commercially engaged with it—while urging a diplomatic resolution to the conflict—are Hungary, Serbia (which sagely “bans its citizens from fighting in conflicts abroad”), China and India.

Spurred on by puppet President Volodymyr Zelensky and his American puppeteers, these countries, especially China and India, have been menaced by the Biden administration for maintaining military and commercial ties with Russia.

The concept of neutrality is an important part of Western Civilization. As expounded in one scholarly tract, “the concept of respect for neutrals appears early in Greek history and remains a nearly constant feature of Classical wars.”

By threatening to punish nations for practicing detached political neutrality in the matter of Ukraine and Russia, even as these neutrals call for comity between countries, and urge a diplomatic, peaceful resolution to the conflagration, things China and India have done—The Empire is working to sunder, as in obliterate, the time-honored, civilizing concept of political neutrality. Judging from its silence, the Stupid Party seconds the Evil Party on the matter. …

… THE REST. “U.S. Cancels Countries, Kills Ancient Concept Of Neutrality” is on WND.COM and The Unz Review, The New American, CNSNews and American Renaissance.

UPDATED (4/10): Recommended is the geopolitical analysis of Brazilian Pepe Escobar, once an analyst for quite a few leftist publications, now confined to the few outposts of critical thinking remaining.

An intrepid, freedom-loving friend traveled from Quebec to Ottawa, Saturday, for the Truckers rally on Parliament Hill. It was, “A wonderful afternoon on Parliament Hill. There were tens of thousands of people, all peaceful and ranging in age from 1 to 91. And trucks galore with blasting horns. It felt more like a Canada Day celebration, but with lots of ‘fuck Trudeau’ chants” 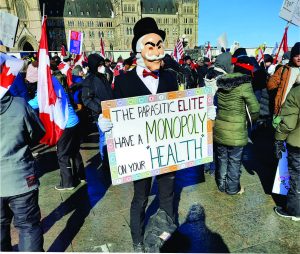 In Trudeau’s words, the protesters were just a fringe minority. A couple of extremists.

Borrowing a line from the great Johnny Cash, I came, I saw, and behold, I did see extremists on that frigid day of January in Ottawa… tens of thousands of them! And trucks as far as you could see with horns blaring, sounding like the last stand at Helm Hammerhand. What I saw was a multitude of amazingly good people who are:

So yep, these were extremists, but that kind of extremism gives me hope that we, the people of Canada, are indeed a resilient, united, and spiritually healthy society that will outlast the ruling elite and keep in check their penchant for subversive, corrosive ideologies. 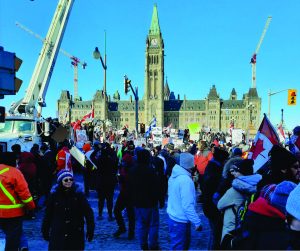 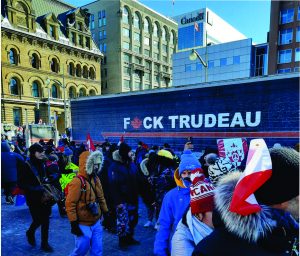 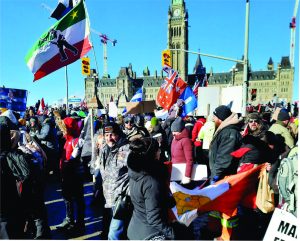 UPDATE: Justine Trudeau is on the run, fleeing like a girl…

Justine Trudeau is on the run, fleeing like a girl…https://t.co/Y8UPrDVJyi

UPDATE (1/31/022): Tucker Carlson, who has exposed Justine Trudeau in all his phony, moral and mental flaccidity, nevertheless will still persist in pretending the Trucker rally ending in Ottawa, Canada, was purely class based. Race is another variable—a blind-spot papered-over by conservatives who just want to be nice.

So, this Hard Truther, yours truly, put the question to our friend and correspondent, who had sent us the above touching impressions and images from Ottawa:

Question: The rally looked pretty white. Was there a noticeable multicultural participation?
Reply: I also noticed the majority white presence at the protest. There were North American Indians beating drums and chanting, which was pretty cool. They hate Trudeau even as he bends backwards trying to absolve the white man’s past crimes.

Indeed. “Conservatism’s perennial piñata,” our Amerindians, whose influence over our politics is pitifully negligible, still drum for freedom, somehow maintaining their hatred of the oppressive federal authorities, stateside, too—despite the nonsense neoconservative deity Dinesh D’Souza (and other like him) spouts about them.

"We're not leaving until it does change."https://t.co/DEN7zzSz9G for more! pic.twitter.com/aynpUFpzzr