NEW COLUMN, now on WorldNetDaily, The Unz Review, and the New American, is “Bleeding Russia Dry And Then Next Color Revolution,” wherein a distinction is made between a “justification” for war and a “reason” for war, I ponder whether Putin’s avid patriotism is matched by that of a younger Russian generation, and dole out some love for Tsarist Russia and Tchaikovsky.

… A trickier question for those of us on the Old Right is this: Putin is a Russian patriot. This, in-depth interviews with the Russian president amply evince. He adores and is deeply acquainted with the nation’s “ancient faith,” its history and traditions. But could it be that we of the Old Russell Kirk Right, nostalgic for the very same things absent in our own societies, are romanticizing the Russian people? This writer shares Dr. Cathey’s love of Tsarist Russia’s great culture before communism. (Boyd says Rachmaninov; I say Tchaikovsky’s “Pathetique,” his Symphony No. 6 is a singularly intense and sublime expression of the agonies of the individual, caught between salvation, sin and love of Mother Russia.)

But is this same sensibility present in younger Russians? No doubt, Putin is steeped in Russian culture. But do younger Russians share his traditionalism? True, very many hate communism, but that hatred is devoid of a civilizational dimension. I fear younger Russians are already in the market for a Western life filled with sexual titillation and consumerism. …

… The Rest of “Bleeding Russia Dry And Then Next Color Revolution” is on WorldNetDaily,  The Unz Review, and the New American.

We conservative and conservative libertarians are civilized souls. This means that we are at heart “free-speech absolutists.” In the words of Elon Musk, “For Twitter to deserve public trust, it must be politically neutral, which effectively means upsetting the far right and the far left equally.”

This paleolibertarian longs for the return of what shall be dubbed here the Skokie Standard. “In 1978, the American Civil Liberties Union (ACLU) ‘took a controversial stand for free speech by defending a neo-Nazi group that wanted to march through the Chicago suburb of Skokie, where many Holocaust survivors lived.” (From “Was The Cop’s Knee On George Floyd’s Neck ‘Racism’? No!“)

In response to a similar sentiment from Musk, I tweeted, “100%.” And, “The point is, get a libertarian free-speech backbone. If the Left posts about killing fetuses, DEAL with it. If the Right posts about the Bell Curve; DEAL! If Holocaust deniers deny the Holocaust: DEAL. If Green Energy hates on your SUV: DEAL.”

A reader was less exhilarated, correctly locating the source of the tyrannical meltdown with the Left. So as to never forget who we—with our civilized code of ethics and classically liberal ideals—are dealing with, read this, a collation of the idiot enemy’s litany of dangerous hate in the enemy’s own words:

The point being—gleaned from their own words—the frothing, fulminating demented deranged Left aims to destroy #Musk. They will destroy us. They will never allow us our speech, our thoughts, and, increasingly, our livelihoods. They want to “vanish” (sic) us.

There can be no peaceful coexistence with these duplicitous devils. Indeed, the only response to those who accuse me, you, of racism, with a view to sweeping us away because we don’t think like they do or do as they do, is Andrew Breitbart’s response, “FUCK YOU. WAR.”

With Andrew Breitbart it was biblical.

God bless Andrew Breitbart. May he continue to rage, rage from the grave.

• “Systemic Racism’ Or Systemic Rubbish?”
• “Was The Cop’s Knee On George Floyd’s Neck Racism? No!”
• “Ethnocidal ‘Critical Race Theory’ Is Upon Us Like White On Rice”
• “Racist Theory Robs And Rapes Reality”

With central and eastern Europe being swallowed up progressively by the NATO alliance, Russia has legitimate security concerns. Abutting its border, Russia will soon have to endure all NATO members carrying out military maneuvers. And as we know so well, NATO and its paymaster, America, would never-ever dream of regime change. It’s not like the US (which controls NATO) has done regime change before, right? David and I take you back to the 1990s, when it all began, except, that back then, leadership such as that of Reagan and Gorbachev understood what was at stake, and worked against Cold War and toward détente. 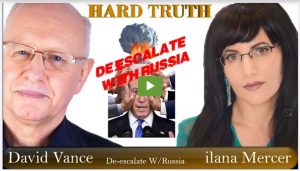