NEW ON HARD TRUTH With David Vance and myself: ‘Truck You Trudeau!’

Conservatives persist in pretending the Canadian Convoy for Freedom, which has served as a lodestar for liberty across the West, was purely class based. The anti-white impetus convulsing the Anglosphere continues to be a blind-spot papered-over by our conservative side. But it is an unspoken reality; white-hot hatred of whites colors almost every crisis in the Anglosphere. We believe that the crackdown in Canada is anti-white and that such an assertion is axiomatically true.

It was self-evidently clear every time the camera panned out. Put it this way: Do you think Trudeau would have boiled over with such bile as he has done, bringing the full weight of the Security and Surveillance State down upon these good, hard-working, praying trucker families if this protest were brown and black in sizeable numbers? Please!…

SUBSCRIBE TO “HARD TRUTH” With David Vance & myself HERE. WATCH. 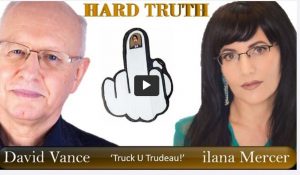