Context: Our mountain neighborhood is blessed with a unique layout. The lower-neighborhood stretch faces green embankments, angled at approximately 60 degrees. This lovely midsection is abutted each side by the road.

I like my incline to be natural, which means that now, the embankment is supposed to be blanketed with wild flowers. But not if the local, progressive, statist tyrant has his way, and he always does.

It has been decreed that a close shave of the neighborhood embankments be the rule, for fear of … as Basil Fawlty would screech, “Fa-Fa-Fa-fire.” That is ridiculous, because the grass is predominantly green, and, you know, … the asphalt. It acts as a firebreak.

But progressive statists are not good at loving a neighbor as thyself (one of the Ten Commandments), which means practicing the live-and-let-live motto. Neither are progressives environmentalists. When it comes down to brass tacks, they don’t much like the natural world.

So mow we do. But we leave the lovely embankment dotted with little alien-like crop-circles of wild flowers and grasses. And, I had a signpost made to place alongside my wild flower crop-circles. It reads:

In one fell-swoop, the local progressive vigilante is being taunted for his lack of brotherly bee love. Mocking the Black Lives Matter catechism is a heresy that drives this progressive prototype more loco than he already is.

In a lecture to the Yale School of Medicine’s Child Study Center, Dr. Aruna Khilanani offered a glimpse into her Criminal Mind. She likened whites to demented, violent predators who think that they are saints or superheroes. And worse.

I had fantasies of unloading a revolver into the head of any white person that got in my way, burying their body, and wiping my bloody hands as I walked away relatively guiltless with a bounce in my step. Like I did the world a fucking favor. (Time stamp: 7:17)

I explain where the focus of your rage should be.

NEW COLUMN, “A Whiteout Of Whites: Ignoring The Albino, Dhimmi Elephant In The Room,” is on WND.COM, The Unz Review, CNSNews.com, Townhall.com and American Greatness.

… unlike Critical Race Theory, Marxism offers a class-based analysis—it fingers social class as the primary source of conflict in society.

Critical Race Theory, conversely, focuses exclusively on race as the source of all oppression. Not on any race, mind you, but on the white race, or on “white supremacy.”

Honest demons that they are, Critical Race Theory sophisticates generally reject the term racism in favor of “white supremacy as a conceptual framework for understanding race-based oppression,” as Charles W. Mills, a CRT “scholar,” readily concedes.

It is conservatives who cling to the comfortable “racism” generality to describe the thrust of Critical Race Theory. They’re the only dazed and confused sorts to bewail CRT’s un-American, diffuse, generic racism. (The folks at Prager U, for example.)

Strictly speaking, Critical Race Theory is not even traditionally racist; it’s exclusively anti-white. It is pro all races other than white.

Unlike their feeble conservative adversaries, critical race theorists admit as much. These odious individuals use “white supremacy” to describe white existence. Irrespective of lives well-lived, to the critical race critters, whites are on the wrong side of creation.

As opposed to Marxists, then, critical race theorists identify race, the white race specifically, as the “primary contradiction in society.”

Socialism is most certainly not central in the BLM list of values; socialism hardly rates a mention in the larger scheme of priming whites for dhimmitude—reeducating, intimidating and subjugating whites qua whites.

That truth, very plainly, is the albino elephant in the room.

Critical Race Theory’s central project is to make whites accept dhimmitude, not socialism. (If the practitioners of anti-whiteness, who already practice capitalism as consumers and producers in a market economy, were converted to theoretical capitalism—would their anti-whiteness dissipate? Naturally not.)…

… READ THE REST. NEW COLUMN, “A Whiteout Of Whites: Ignoring The Albino, Dhimmi Elephant In The Room,” is on WND.COM, The Unz Review, CNSNews.com, Townhall.com and American Greatness.

“Thank God for Ilana Mercer, one of the only clear-thinking intellectuals that really understands the point of Critical Race Theory.”

Thank God for ?@IlanaMercer?, one of the only clear-thinking intellectuals that really understands the point of Critical Race Theory.

“Ignoring the Albino, Dhimmi Elephant in the Room” https://t.co/A7RHMGrpCb

UPDATE II (5/30): Yes, people are finally getting the urgency. 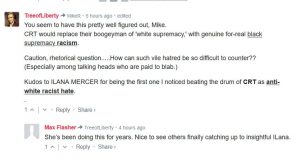 “Virtuous people become virtuous by acting virtuously. Similarly, one becomes a warrior by acting like one. The Warrior Within envisions himself crucifying, without mercy, the monsters of his choosing.”—Jack Kerwick

Warriors aren’t born. They are made.

And a Warrior without Ruthless Intent is like a library without books or, more accurate yet, a square without four sides.

Ruthless Intent is nothing more or less than the will to crush the Enemy, those who would prey upon the innocent, into nonexistence.

To the end of cultivating this virtue—and, yes, it most certainly is a martial and moral virtue—physical training is necessary, yes. But even more importantly, mental training is required.

To cultivate Ruthless Intent, the aspiring Warrior must routinely engage in three mutually supportive and equally essential activities: Self-Talk, Visualization, and what Warrior Flow refers to as “Visceralization.”

Self-talk requires one to pay meticulous attention to the inner commentary that the mind ceaselessly cranks out, for even when it is commentary upon happenings in the external world, it is, ultimately, autobiographical, it is self-commentary, for our thoughts on the world, our relationships with others, are inescapably colored and shaped by our experiences and memories.

We need to manage that “inner voice.”

Self-talk is inescapable. We are all incessantly speaking to ourselves, whether we realize it or not. There is scarcely a moment when, either through word or image, we aren’t communicating to ourselves. Past experiences, or our interpretations of those experiences, we have, in large measure subconsciously, weaved into an autobiographical narrative. As is the case with any other work, our self-story is necessarily selectively edited. Yet we confuse this highly redacted version of ourselves with our whole selves.

And we allow this abridged reading of ourselves to color our sense of reality.

Warrior Flow implores students to attend carefully to their Self-Talk. Moreover, they are to assume conscious control of it, to habituate their minds to thinking self-affirming thoughts. In the case of this combat art specifically, the Warrior-in-the-Making must begin thinking and living as if the future self that he wants to become is already a present reality.

Yet Aristotle knew that being virtuous was a matter not just of thinking a certain way, but of feeling the appropriate way. For instance, a courageous person is someone who knows what to fear and the extent to which he should fear it. The object of fear elicits the emotion or passion of fear within the body. The courageous person, though, experiences fear in the appropriate proportion.

The aspiring warrior must feel as the Warrior that he will become feels. As he regularly affirms his own physical abilities, his resolute acceptance of injury, and even death, in battle, and his equal resolve to incapacitate the Enemy by whichever means, with ruthless efficiency, his Self-Talk will necessarily be accompanied by visuals.

As with his Self-Talk, though, the Warrior Within must make sure that the activity of Visualization in which he engages is consciously directed. He needs to open up the reservoir of his imagination and unleash his creative powers as he envisions himself crucifying, without mercy, the monsters of his choosing. They could be real people or imaginary. They can be people who one has personally known or only those of whom one has heard. In any event, to cultivate Ruthless Intent—the conviction that predators must be reduced to prey, the raw, undifferentiated determination to instill within violent attackers the same unbridled terror that they sought to inspire in their victims—one must not only visualize, but visceralize.

Visceralization is a species of visualization. When a person engages in Visceralization, he doesn’t just see the object of his imagination; he hears, smells, and touches it, and he perceives it with all of his senses in painstaking detail. He visualizes it in what students of Neuro Linguistic Programming (NLP) refer to as an “associated” way.

When a person visceralizes he experiences those emotions that he either once experienced, if he is in effect reliving a past event, or those that he would experience if the event that he visceralizes actually occurred. Physiologically speaking, the emotion felt in the body while visceralizing and that felt in response to a real world happening are one and the same. The brain doesn’t know the difference.

Specifically, when developing Ruthless Intent, an aspiring warrior must not only perceive his attacker or attackers in his mind; he must as well feel in the very marrow of his bones all of the contempt, the righteous indignation and fury with which he visualizes himself destroying the Enemy. Physiologically speaking, the feelings that he conjures while training are one and the same as those that he would have in a real confrontation. The brain doesn’t know the difference between the fantasy and the reality.

While immersed in visceralization, the aspiring Warrior can, for example, feel the flesh of the Enemy’s neck spontaneously with the sound of it snapping as he drives an axe-handed chop to it with all of the power that he believes is necessary for the purpose of cleaving the Enemy’s skull from his body. Beholding the (admittedly anatomically impossible) spectacle promises to go no small distance toward marshalling and channeling from within one’s pain, rage, fear, and disdain for the wicked.

I leave this to your fertile imagination, but there are practically limitless ways by which the Warrior-in-Waiting can visceralize visiting destruction upon the Enemy. Creativity in combat is a virtue of the Warrior. Yet it presupposes Ruthless Intent.

And to the end of cultivating Ruthless Intent, Self-Talk, Visualization, and Visceralization are imperative.