NEW COLUMN is “Mourning The Queen— But Did Elizabeth II Drop The Ball?” It is now on WND.COM and The Unz Review.

It cannot be denied that Queen Elizabeth II of blessed memory partook in the decision to support the unchecked majority rule of the African National Congress (ANC) in South Africa, my homeland.

Like her Majesty at the time, most politicians and public intellectuals thought nothing of delivering South Africa into the hands of professed radical Marxist terrorists. Yet any one suggesting such folly to the wise Margaret Thatcher risked taking a hand-bagging.

The Iron Lady had ventured that grooming the ANC as South Africa’s government-in-waiting was tantamount to “living in cloud-cuckoo land.” (Into The Cannibal’s Post: Lessons for America from Post-Apartheid South Africa, p. 147.)

But what do you know? Queen Elizabeth did just that! Over Mrs. Thatcher’s objections, in 1987 the queen had bullied Prime Minister Thatcher to sanction South Africa.

And in 1979, noted British paleolibertarian Sean Gabb, the queen also muscled Mrs. Thatcher to go back on her election promise not to hand Rhodesia over to another bunch of white-hating black Marxists.

Most disquieting to decency: Although search engines are energetically scrubbing this fact from the Internet—the Queen had knighted Robert Mugabe. Mugabe was chief warlord of Zimbabwe, formerly Rhodesia (may that country rest in peace).

To quote Into the Cannibal’s Pot, the book aforementioned:

“By the time the megalomaniac Robert Mugabe was knighted by Queen Elizabeth II (1994)—and given honorary doctorates from the Universities of Edinburgh (1984), Massachusetts (1986), and Michigan (1990)—he had already done his “best” work: slaughtering some 20,000 innocent Ndebele in Matabeleland (1983). Western conventional wisdom was no wiser. (And the United Nations responded invariably by … condemning Israel.)” P. 134.

Mugabe was nothing if not consistent in his contempt for all life.

Question: What do you call a “person” who butchers and barbeques baby elephant?

Answer: A motherf–ker. Lowbrow Robert Mugabe, as Foreign Policy magazine had reported in 2015, “celebrated his 91st birthday followed by a lavish party with an exotic menu, reportedly including barbequed baby elephant.”

Is it any wonder Dr. Gabb took a different measure of her Majesty in 2012, dubbing her “Elizabeth the Useless“? Gabb’s “Sixty Years a Rubber Stamp” unfurls a list of her Majesty’s acts of constitutional omission, if not unconstitutional commission. …

…THE REST. NEW COLUMN, “Mourning The Queen— But Did Elizabeth II Drop The Ball?,” is now on WND.COM and The Unz Review. 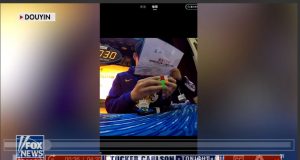 NEW COLUMN is “CNN’s Sinophobic Expert Is Clueless: China Is Reactionary, Returning To Confucianism; Not Communism.” It’s currently on WND.COM, The Unz Review and CNSNews.com.

… Fareed Zakaria’s assertion that China is returning to communism is shallow, even stupid, given the concerted quest among Chinese to reverse the communist Cultural Revolution and reclaim Confucianism, which is antithetical to communism.

While America crumbles into a deadening, brutal wokeness; China, interestingly, seeks spiritual sustenance in its ancient, grand tradition of Confucianism.

Native to China, Confucianism was decimated by socialism, which—Mr. Zakaria may have forgotten—came out of the West. Unlike our own Traitor Class, China’s leaders know what succors the soul, and they want to infuse the nation with that home-grown cultural sustenance.

The Chinese are not a multicultural pottage; they are a real nation that shares a rich and ancient culture. The beauty of a shared, admired heritage is that the country can reclaim it as it works to reverse the foreign cultural revolution, which forbade Confucianism. And indeed, “Chinese parents are keen on a more Confucian education,” confirms The Economist.

Core curriculum and Western classical texts have been all but purged from American schools. In China, the number of “classical texts to be taught in schools has increased from 14 to 72.” From here on, China’s kids will be “learning classical Chinese thought, texts and morals, especially those associated with Confucius.”

So, which is the more exulted and elevated quest, Confucianism or charter schools?

… READ THE REST. NEW COLUMN, “CNN’s Sinophobic Expert Is Clueless: China Is Reactionary, Returning To Confucianism; Not Communism,” is currently on WND.COM, The Unz Review and CNSNews.com.

Fareed Zakaria is a CNN serial plagiarizer. (Read “Fareed Zakaria Plagiarizer.”) Like another CNN offender, online onanist Jeffrey Toobin, Zakaria is always forgiven and brought back from literary purgatory, to inflict mediocrity and derivative insights on viewers who’re none the wiser.

The neoliberal Zakaria recently broadcasted a “television special, China’s Iron Fist.” He joined neoconservatives in calling China “The most serious competition the United States has ever faced. The Chinese are doing AI, biotech, hi-speed rail – the industries of the future.”

I watched the broadcast. It was the simplistic, angels-and-demons story-line, that proceeds from the premise that America is an oasis of freedom and happiness, whereas in China, which has become quite the middle-class, materialistic, consumerist society, all yearn to breathe free … in America, naturally.

Well, the Han Chinese, who constitute 94% of China, rather like their nationalistic, monolithic  (at least compared to the US) country.

What I most hate about the Chinese culture is its contempt and abuse of the natural world, critters included. But I couldn’t be bothered with the American foreign-policy elite’s sinophobia, which seems to be a distraction from the fact that the Chinese ruling class generally acts in the national interest; whereas American ruling elites act in ways so antagonistic to the people’s welfare as to constitute treason.

In any event, China, warned Zakaria, is becoming less western. The West being the best, such a trend is condemned. Well, the always low-key observations of The Economist make more sense:

“China’s leaders still want investment and technology from the West, but they think it is in decadent decline and are decoupling from Western norms and ideas.”

They have a point, no?