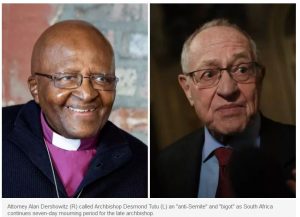 Archbishop Desmond Tutu has died (this BBC “stellar” news report does not “report” whether it was today or yesterday). I had attended the Archbishop’s inauguration with my father, the late Rabbi Ben Isaacson, who had been friendly with Archbishop Tutu.

My father and I also took a gracious (and sumptuous) afternoon tea with the Archbishop decades back in his official residence in Cape Town. (These events are mentioned briefly in my 2011 book, Into the Cannibal’s Pot: Lessons for America from Post-Apartheid South Africa.)

However, the tracts being written about Tutu by American conservatives and neoconservative—and what a resurgence we are witnessing in this reflexive mindset!—are laughable. (Americans must refrain from writing about cultures that are not American; they are simply too insular and chauvinistic to shed anything but darkness on these matters.)

For example, the authors of Black Skin Privilege and the American Dream, reviewed years back by Jack Kerwick on FrontPage Magazine, had picked on Desmond Tutu as an example of black privilege in South Africa! Of all things. Again, this is as laughable as it is to bang on ignorantly and endlessly about Tutu’s criticism of Israel, as if that’s never valid or permissible.

It must be an authorial tic peculiar to neoconservatives, and applied to anyone with an anti-Israel position, for which Archbishop Tutu is famous. He also opposed the Bush travesty that was the war on Iraq. It is also typical of the neoconservative’s ahistoric approach, where a proposition or an idea (black privilege) is applied without context or nuance, to any and all annoying blacks (Tutu became that alright).

In truth, Tutu embodied the old-style, old-school African gentleman. The Archbishop grew up in wretched poverty, received—and gladly accepted—a decent education courtesy of the Church, and worked his ministry so hard as to reap the rewards. (In “Into the Cannibal’s Pot: Lessons for America from Post-Apartheid South Africa,” I discuss the wonders done by the white-run churches in South Africa. What good equalizers were some schools in the old South Africa:  Desmond Tutu, myself, and hundreds of thousands of other Africans, belong to the same alma mater: UNISA.)

Sure, Tutu was left-liberal and a critic of Israel and of neoconservative project (God bless him for that). But to me, as I said in “King Tut(u) Not So Terrific,” his impiety stems from never having piped up about the ethnic cleansing of rural whites, Afrikaners mostly, from the land in ways that beggar belief. Saint Mandela certainly remained mum about farm murders that are Shaka-Zulu worthy in grisliness.

And so, by the way, had our conservative and libertarian friends remained silent about farm murders until quite recently when talking about anti-white South Africa has become all the rage.

In any case, my meeting with the Archbishop Tutu was memorable. From that occasion I took away that Desmond Tutu was fond of my father and respectful of dad’s Jewish faith and scholarship. The two had a brief and lively exchange about a philosophical difference between Judaism and Christianity. My father was a redoubtable debater. Ditto Tutu. But both men were far better religious leaders than they were political activists, for which they, alas, became known.

UPDATE (12/28/021): In the tackiest manner, legal scholar Alan Dershowitz, who is currently using his analytical prowess to justify forceful, aggressive vaccination, deployed a visit to a Fox News set on an unrelated matter, to libel the late Archbishop Desmond Tutu. As follows:

“The world is mourning Bishop Tutu, who just died the other day,” hissed Dershowitz. “Can I remind the world that although he did some good things, a lot of good things on apartheid, the man was a rampant antiSemite and bigot,” spewed Dershowitz.

“The man minimized the Holocaust. The man compared Israel to Nazi Germany. When we’re tearing down statues of Jefferson and Lincoln and Washington, let’s not build statues to a deeply, deeply flawed man, like Bishop Tutu. Let’s make sure that history remembers both the goods he did and the awful, awful bads that he did as well.”

Others on the Fox News panel looked on at the Dershowitz train wreck in horror. Aside his uncivilized and boorish timing, Dershowitz’ views are skewed. They are utterly Israel and Jewish-centric. Tutu was indeed pro-Palestinian, but this did not make him an anti-Semite. And he certainly was no “Holocaust minimizer,” what ever that means. As mentioned, I had visited with him with my rabbi father, who was friendly with the archbishop. Tutu was polite, warm and kind.

Far more illuminating and interesting than Dershowitz’ Israel compliance shtick is my account, in “Into the Cannibal’s Pot: Lessons for America from Post-Apartheid South Africa,” of Israel’s friendship with Apartheid South Africa. Israel had refused to follow the West in isolating South Africa, and actively and productively—especially militarily—engaged with South Africa. Ronald Reagan tried the meeker form of “constructive engagement” before he was overridden by his Republican party, and told specifically that he was out of step in his wish to engage with South Africa, rather than punish her.

It’s not like Dershowitz ever met Tutu, but wait a sec, I had actually met the Archbishop, and even had the honor of attending his inauguration. Imagine! Mine is a real-life assessment that dares to fail the Israel First test. OMG!

Kids like Ethan Williams are sent into the world wide-eyed and filled with only wonderment. (Read “Sacrificing Kids To PC Pietism,” 2011 and “Progressive Crazies Are Getting The Kids Killed.”) Nary a warning are they issued as to the reality of crime in America—and beyond. Parents are instrumental in these tragic events, having never given their kids “The Talk,” as John Derbyshire called it.

As a neighborhood to bunk down in, during a visit to New York City, Ethan Williams chose Bushwick (pictured). Bushwick is known as dangerously and diversely hip. Was this reckless decision not made against the background of a lifelong, familial devotion to such displays of hipness, “openness” and an obsession with The Other?

His father, Jason R. Williams, says the kid was all about curing “poverty and violence” and doing “mission work in Rwanda” (as opposed to in white, impoverish Appalachia).

Likely race-related, the murder of this typical innocent do-gooder, Ethan Williams, was masked as a ‘stray bullet.’ Writes his father, who—it has to be said—seems to have helped cement this delusional, progressive-Christian ideation in his kid’s mind:

Police believe our son’s killer mistook him and his friends for rival gang members. They were instead just a group of Midwestern boys on their first trip to see “the greatest city in the world.” If he had been given the chance, without question Ethan would have embraced his would-be killer, asked his name and hung out on those same steps with him swapping stories deep into the night.

Here is how an alien from deep space would puzzle over the creatures who, by dint of a miracle, still dominate the Western world:

This prototypical Western man is flabby in body and mind. He is fearful and easily cowed. He erupts in tears at a drop of a hat. He is gripped by the culture of apology, and flagellates over sins he has not committed. His eternal state of expiation is driven not by goodness, but by insufferable self-righteousness.

This archetypal Western man forgives unspeakable violence against himself and those he is obligated to protect. He would not hurt a fly, much less repel a foe. An astute alien (from deep space) would notice that, in this regard, there is not a dime’s worth of difference between the “conservative” and “liberal” earthling. Both insist on catering to and enabling organized entities—in politics and in other crime— that despise them for their abilities and frailties, and instinctively seek to harm them.

These hostile identity groups segregate themselves voluntarily from the western weakling …
Flash- feral mobs flood places of commerce across the once-great country of America. What does the overwhelmed creature under observation do? “Conservative” or liberal, he refuses to finger his assailants. Instead, his experts implicate abstractions (“risk-taking”), and his media mouthpieces (Daily Beast or and Fox News) point to technology such as social media. Yet another, least logical, bogus causal agent invoked: the racism of the Democratic Party.

Not only does this generic Joe refuse to identify his proud, empowered attackers, but he rejects the possibility that they act out of ingrained animus for his kind. The swarms that descended to take what is his—to hurt him and even kill him—he jocularly terms mischief-makers, teens, twitter-operators, technology savvy youth. Yes, this brow-beaten, emasculated, excuse-for-a-man uses diminutives to describe the contempt-filled stalkers who menace him and who would squash him like the bug he is.

If not for YouTube footage of the racially uniform formations terrorizing businesses in Chicago’s Magnificent Mile, in the upmarket area of Streeterville, in Georgetown, Washington, D.C., in Las Vegas, in St. Paul, Minnesota, in Philadelphia, on and on—our studious alien from outer space would be none the wiser about the hue of hatred on Planet Earth. As the man from outer space has surmised, his strange subjects are certainly impervious to facts.

NEW COLUMN is “For The West To Survive, Christians Must Toughen Up.” It is now on WND.COM, The Unz Review, Townhall.com, The New American, and CNS.News.com

The West is collapsing under the weight of authoritarian governments. These “representatives” are rapidly robbing the individual citizen of bodily autonomy, of freedom of movement, and of the ability to work, play and partake in society.

Under martial law, Australia and New Zealand have, in the course of the Covid pandemic, practically reverted to penal-colony status.

Working in tandem as a criminal syndicate, Canadian and American state and corporate entities have colluded to corner the individual, and compel him to offer up his life-blood to the Covid spike protein. That is if their Subject wants to … eat.

Covid vaccine mandates and passports. Lockdowns and quarantines. And racial subjugation to The Other, in the form of a Critical Race Theory that festoons state and civil society: Why have we rolled over? Is this white guilt? And does historical Christianity play a role?

By so surmising, Gibbon brought upon himself the wrath of “bishops, deans and dons”—not to mention that of the great Dr. Samuel Johnson’s biographer, James Boswell. Boswell called Gibbon an “infidel wasp” for “the chapter in which he argued that the fall of Rome was hastened by the rise of Christianity.”

And indeed, Gibbon seems to point toward Christianity’s self-immolating, progressive, pathologically inclusive nature, remarking on the courting by early Christians of “criminals and women.” (Not my words.) …

… READ THE REST: NEW COLUMN, “For The West To Revive, Christians Must Toughen Up,” is now on WND.COM, The Unz Review, Townhall.com, The New American and CNS.News.com

UPDATE (10/28/021): Anything else heroic and muscular from the de facto Christian establishment since the crusades, Sean? It seems that preaching that The Other is always better than white Christians—certainly more exotic—is now a Christian catechism.

NEW COLUMN: For The West To Survive, Christians Must Toughen Up

THIS WEEK ON HARD TRUTH: Are we living in the last days of Rome? What role has Christianity played in bringing this about? Hard Truth confronts the inarguable fact that Western Civilization is warping out of recognition. Ilana and David ask why. Edward Gibbon blamed Christianity for Rome’s demise. I’m inclined to agree. David disagrees. That’s what makes it fun.

WATCH: “All Empires Collapse: Has The West Reached Tipping Point, And If So, Why?”

LISTEN TO THE HARD TRUTH Podcast:

“All Empires Collapse: Has The West Reached Tipping Point, And If So, Why?”