If you are reading translations of the Tanach (acronym in Hebrew for all books of the Hebrew Bible: Pentateuch or Torah, Prophets and Writings)—you’re likely reading a lot of porcelainized nonsense

Funny thing how Christian commentary “changes” what my Hebrew Bible says, plain and simple. (I am sure politically correct, Americanized rabbis will join in this textual finessing.)

See, not only can I read Biblical Hebrew perfectly well—I’m looking at the tract now—but my Israeli teachers decades ago confirmed the commentary that claims Ham and descendants were cursed.

Ham did something unspeakable to his father, Noah. Noah, cursed him and descendants.

“And Noah awoke from his wine, and knew what his younger son had done unto him.”

But not according to King James commentary, which is still better than most. Accordingly, the biblical author didn’t know what he was saying. Ham’s descendants were never cursed in the Hebrew Bible.

That’s why I say: If you are reading translations of the Tanach (acronym in Hebrew for all books of the Hebrew Bible: Pentateuch or Torah, Prophets and Writings)—you’re likely reading a lot of porcelainized nonsense.

ME: The biblical tract doesn’t say today’s blacks originated in Ham. And I, of course, claimed nothing of the sort. I said quite clearly that Ham and descendants were cursed in the Hebrew Bible, and pious scripture should not develop creative ways of pretending they were not.
I don’t know who Ham begot. I do know that his excuse-making defenders say he begot the greatest civilization ever. ? Why, of course. Next they’ll claim ancient Egyptians were really Africans. Wait a sec, they have already.
Ask Mary Lefkowitz, Greek classicist, author of “Not Out Of Africa: How “Afrocentrism” Became An Excuse To Teach Myth As History.”

Yes, let us demonize non-aggressor Noah for objecting to his abuse. I have not disputed your point. I only questioned the hubbub of white-noise commentary around what seems to be straightforward biblical text.

Note how Covid conformity had been replaced with the requirement that we all find religion on Ukraine.

Duly, one of the world’s greatest conductors, Russian Valery Gergiev, was fired from his position as head of the Munich Philharmonic because he wouldn’t denounce Putin. The Free World in action!

Will they bring in the Rack? Unnecessary. Banishment from polite company and professional cancellation by right-thinking people is worse than the pain of torture on the Rack.

The masses crave an opiate. Leaders know how to exploit this quest for group-think. As soon as the usefulness of one faith (Covid) expires; another takes its place (Ukraine) courtesy of the ruling elites, and with the willing complicity of the crowds. Those who do not think in lockstep—why, they need to be banished, punished. 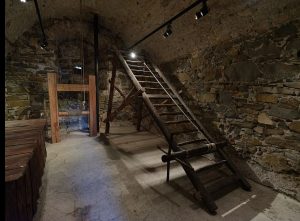 It got me to thinking about questions I ask anyone who approaches me about my stance on what is going on in Ukraine: Why the over-the-top passion on this topic? Why Ukraine? Why such an hysterical response when Ukraine and its position in Europe and in the world are not strategically important to us? After all, the United States has been on the invading-end of conflicts for decades…Bosnia, Iraq, Syria, Libya, Afghanistan, and so on. Yet, somehow our foreign ventures are always virtuous and noble? And what kind of outrage did we express for those hundreds of thousands of Tutsis killed in Uganda or the thousands of Kurdish inhabitants eliminated by our ally Turkey?

The media scrum had framed the Trump impeachment circus round II as an “emotional” affair.

Over and over again did the word “emotion” inform reporting, appear on the lips of legislators,  and culminate in an “emotional” catharsis in the Chamber, where the “affected” representatives told a captured audience how they suffered.

Where did this sick therapeutic culture originate? Where else but in America.

I recalled reviewing a book, in 2005, when London’s Jewish Chronicle was a serious magazine. What a relief it was, then, to learn that Jewish thinkers didn’t herald the therapeutic age, a fact that emerges from Andrew Heinze’s outstanding Jews and the American Soul.

In his examination of “why [between 1890 and 1945] psychology became a booming cultural industry, outstripping theology and philosophy as a guide for a literate mass audience seeking advice on how to live”, Andrew Heinze, a scholar, established that “America’s Protestant heritage yielded a powerful American interest in personal development and a massive audience for popular psychology”.

The rationality of the Enlightenment had come under fire from movements espousing mysticism, romanticism, and the occult. The ascendancy of “the psychological interpretive mode” between the 1880s and the 1920s was compatible with Christianity.

What do you know? In searching for an image to accompany this blog post, I came across what looks like a work of scholarship that affirms the Anglo-American origins of these leanings as well as the coercive, manipulative nature of the “therapeutic imperative”:

Therapy Culture explores the powerful influence of therapeutic imperative in Anglo-American societies. In recent decades virtually every sphere of life has become subject to a new emotional culture. Professor Furedi suggests that the recent cultural turn toward the realm of the emotions coincides with a radical redefinition of personhood. Increasingly vulnerability is presented as the defining feature of people’s psychology. Terms like people ‘at risk’, ‘scarred for life’ or ’emotional damage’ evoke a unique sense of powerlessness. Furedi questions the widely accepted thesis that the therapeutic turn represents an enlightened shift towards emotions. He claims that therapeutic culture is primarily about imposing a new conformity through the management of people’s emotions. Through framing the problem of everyday life through the prism of emotions, therapeutic culture incites people to feel powerless and ill. Drawing on developments in popular culture, political and social life, Furedi provides a path-breaking analysis of the therapeutic turn.

UPDATED: A fair point is made by our reader in the Comments Section. I am, however, making a philosophical, or theological, point about Judaism as opposed Christianity. Judaism is more legalistic. The supernatural, mysticism, romanticism, and the occult are more compatible with Christianity than with the rationalist morality of Judaism.