This is a keeper.

In defense of this poor, singularly charmless girl, Greta Thunberg’s facility with English and her terse, to-the-point compositional skills are way better than those of her “high-achieving,” verbally diarrhetic and ungrammatical American peers.

I used to have some respect for Lady Gaga. With all her pretentious Yoko Onanisms, Stefani Germanotta, Gaga’s real name, is actually a hard-working and, at times, polished singer.

But to watch Gaga, at the 61st Grammy Awards, perform a number called “Shallow” was to endure an assault on the eyes and the ears.

Legs permanently splayed like an arthritic street walker, Gaga traipsed around catatonically, attempting to head-bang, but getting disoriented. Some things are best left to a macho, metal-head guy.

Gaga’s look was not a good one. But her sound, which is what counts here, was positively terrible. Yet, Gaga—lugging microphone and mount around like a geriatric with a walker—was a highlight in what was a pornographic, cacophonous extravaganza.

Aside the gorgeous Alicia Keys, host of the 2019 Grammys, who is talented and charming, and Dolly Parton, a consummate pro—the event showcased the gutter culture that is the American music scene. The country is truly in the musical sewer.

The petulant female artists, so proud of their seized power, showcased power, all right—but it was all in the hips, the pelvis, and in thrusts and twerks of the tush. Not one transcendent, inspiringly beautiful dance move did these throngs of crass stompers execute, on the pimped stage.

Janelle Monáe? The sum total of this artiste’s musical “talent” is simulating sex on stage. “Let the v-gina monologue,” she hissed venomously at her adoring, masochistic fans, while moving her nether regions to a base, atavistic beat. Indeed, in an orifice, Miss Monáe has found the right interlocutor.

Let us stipulate for the record that this is never about lyrics. Cardi B screaming that she “likes morning sex” but that nothing in this world does she love “more than checks” is not an issue.

Put it this way, if the greatest composer ever, Johann Sebastian Bach, set his divine, god-like cantatas to the saucy, naughty lyrics of Chaucer’s Canterbury Tales, would I decry his sublime composition as immoral? Don’t be daft. The music of J.S. Bach would still be sublime if it were set to Cardi B’s gutter language.

My point: Cardi B doesn’t make music. The category for which she and her sisters should be nominated, if I am being charitable, is street theater.

Incessant, asinine, genital-speak is one of the things that distinguishes these female artistes (as in “a person with artistic pretensions”) and makes them particularly repulsive. Do they not realize some things are best left veiled and mysterious?

Women of Monáe’s ilk are first to robotically protest the objectification of their sex, but are complicit in ensuring that The Act itself suffers the very same fate: sex has been made an object, a fashionable accessory, part of an empowering, emasculating life-style.

Screaming there was aplenty at Grammys No. 61. But good voices? None at all. Informed we were that the insipid Kacey Musgraves, a two-chord whiner, is what passes for country music, these days. …

I don’t listen to modern country music. I don’t care for it particularly. I like old country music, when it still came out of the country. What they call country music now is what I call Midwest mall-crawler music. You go into big-box stores and come out with huge pushcarts of things. It’s not an agrarian form anymore. When it comes out of the country, it’s not farmers or woodsmen, or whatever. It doesn’t make much sense. It’s just suburban music. 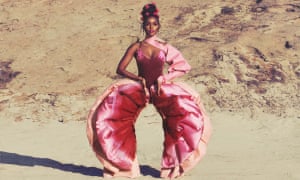 HER casket lies in state, TODAY.  She brought joy and happiness to many millions across the world, without waging non-stop war to make the world in the image of her America. She is Aretha Franklin. Let us celebrate the life of this truly great American:

Aretha Franklin (who also had fighting words for the Brothers in her life), sang for the love of Jesus. “She was singing to God, just as when she screamed out her passion as a sinner cleansed by the blood of the Lamb: When my soul was in the lost and found/You came along to claim it. And when she threw out her arms wide under the spotlights, it was not to thank the fans who clamoured for her as much as to say, Precious Lord, take my hand.”

AT POINTS in her concerts, which enthralled America for 50 years, Aretha Franklin would fling her arms out wide. Sometimes it was to shrug her strong shoulders out of some satiny or feathery dress, or to throw away her long fur coat, like any diva (though she was the ultimate diva) who by the end of her career had won 18 Grammys and sold 75m records. Sometimes it was to embrace America, all colours, as when she sang “Precious Lord” at Martin Luther King’s funeral, or gave her rapturous version of “My Country ’tis of Thee” in a big-bow-statement hat at Barack Obama’s inauguration. Or possibly those arms just demonstrated how her voice, the whispering or crying height of it and drop-jaw depth of it, seemed to pass any limit that people might imagine.

Open arms suggested love, but more often Everywoman’s frustration, black or white. For every super-sharp man she daydreamed of, Turns me right on when I hear him say/Hey baby let’s get away, there would be ten who let her down: You’re a no-good heartbreaker/You’re a liar and you’re a cheat/And I don’t know why/I let you do these things to me. They messed with her mind, as she fumed in the Blues Brothers film in 1980, pummelling her palms into her big man’s stupid chest: Just think/Think about what you’re tryin’ to do to me. After all, it don’t take too much high IQs. Men in general didn’t begin to give her what she wanted, just a little respect when you get home…R-E-S-P-E-C-T/Find out what it means to me. This, her most famous song, wasn’t just about a put-down woman and a do-wrong man; it became the anthem of every liberation movement because of her roof-raising style. It was her personal anthem, too. She wished to be called “Ms Franklin”, to be paid cash and to be spared air-conditioning. All I’m askin’, honey.
Latest stories

Those wide arms also showed how her whole body sang. When she accompanied herself on the piano, big rampaging chords picked up from Oscar Peterson and Art Tatum, she sang with the stomach as well as heart and head. As a child of ten she’d understood that, hiding her chronic shyness behind the instrument while she sang “Jesus be a Fence Around Me” with the voice of an angel, or a grown woman. …

MORE in The Economist (August 23rd).

Naturally, it’s not John McCain and his “national greatness “conservatism.”

READ the expose on McCain’s history in Vietnam by Sydney Schanberg. Back in the days before American journalism became a circle jerk of power brokers, Mr. Schanberg was considered one of “America’s most eminent journalists.”

In an America that is great, mediocre, even stupid, legacy kids like #MeghanMcCain would not be considered leaders or thinkers. #MAGA #Trump. https://t.co/CHUMkM1UjD

Remember when Americans mocked scenes of North Koreans mourning the death of their leader, Kim Jung-Il?

The 'good American', the 'right thinker', fears looking in the mirror like a vampire shuns a crucifix. The mourners of McCain possess the spirit of an alien, hostile people. https://t.co/AAzv69tzgk

The unassailable opinion of an American citizen, the wife of a POW, after half a century of having to fight her own government, including the US Senate, including Sens. McCain and Kerry, on behalf on her husband who was never returned from Laos. https://t.co/Zy9Gkgyi0N https://t.co/9zarm6s4V9

The vile #MeghanMcCain needs to be put on notice: She is a #NeverTrumper Biden voter! How dare this rich privileged moron, daughter of a war monger and worse, wax indignant, in belated defense of #Deplorables?
The dummy is an incoherent hypocrite.https://t.co/UUFRrVjxVo

U think she has swung? So naive about America's hereditary political idiocracy! #MeghanMcCain's an establishment neocon who's preening morally, making hay from true misery of ordinary Americans. The lefty daughter of war criminal John M would never sully self by voting populist https://t.co/73JsTZxfBh

“Hanoi” John McCain. His daughter is of a piece, both stupid and cunning. https://t.co/LclFZAWdqK https://t.co/RrRR3btYp4