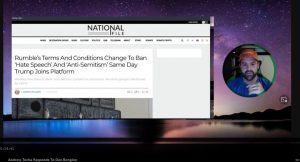 2 thoughts on “It’s Taliban Tube, Not YouTube (And Gab’s Torba Is Truly Free)”