Coming from the liberal Economist, an accounting of Donald Trump’s foreign policy achievements carries more force. While to me, this is a list of Trump’s achievements, to the Economist, it is a list of the president’s failures. (Inquiring minds should always read the reasonable opposition, which means sources outside America.)

Before cussing him out, they write: “Donald Trump has given American foreign policy a bracing bolt.”

The area where Mr Trump has shaken things up most is in relations with China, the single biggest issue in American foreign policy. Such a rattling may have been coming anyway because of China’s growing aggression. But Trumpists believe the president’s new realism marked a decisive break with the Democrats’ tendency to favour process over outcomes.

According to this narrative, Americans naively thought that opening up to China and letting it join the WTO in 2001 would in time encourage it to become more liberal and democratic. The opposite has happened. China exploited the West’s openness in order to steal its intellectual property. Under its increasingly authoritarian president, Xi Jinping, it has become a fiercer economic rival, as well as a more powerful one. It has continued to build up its armed forces and to bully its neighbours. It was left to Mr Trump to challenge the idea that this was unstoppable.

Toughness towards China has become a rare area of bipartisan consensus in America. The administration has started to shift attitudes elsewhere, too. It successfully urged Britain to shun Huawei, a Chinese telecoms giant, for its 5G telecoms network. More allies are expected to fall into line. Mr Pottinger says that Europe is “18-24 months behind us, but moving at the same speed and direction”. In Asia, America’s embrace of the phrase “a free and open Indo-Pacific”, expressing resistance to Chinese hegemony, has found favour from India to Indonesia, much to China’s annoyance. …

Mr Trump’s response to covid-19 has shown this approach at its worst. In the midst of a global pandemic he chose to attack and abandon the World Health Organisation, the body responsible for tackling such crises. Where the world would normally expect America to take a lead, or at least to try to, it found an administration more interested in blaming others and shunning global efforts. Something similar goes for the greater crisis beyond covid, that of climate change: a repudiation of international efforts and wilful negligence at home. Every such American retreat from the international system is seen in Beijing as a chance to advance China’s claims.

It’s the platform Trump was elected on: look after neglected and impoverished Americans. America First.

The second area of damage is Mr Trump’s sidelining of his allies, who have frequently had no prior warning of major developments such as America’s abandoning of the Kurds in Syria or its reduction of forces in Germany. America’s alliances can act as a force-multiplier, turning its quarter or so of world GDP into a coalition accounting for some 60% of the world economy, far harder for China or Russia (neither of which has a network of permanent allies) to resist. Yet Mr Trump has taken allies for granted and belittled their leaders while flattering Presidents Putin and Xi. Foreign-policy get-togethers are awash with worries over “Westlessness”.

Amazing: Our allies seem to think that the role of an American government is to work for them, instead of for the American People.

My take on the Kurds, for whom I feel enormously, is a little unusual, articulated in “Bush Betrays The Kurds” and “Masada On Mount Sinjar“: Israel was missing in action on the Yazidi’s Masada odyssey and on matters Kurd. The Kurds are Israel’s responsibility. READ.
Similarly, the Palestinian refugees should have been a regional problem, in particular, the problem of the wealthy Arab countries. 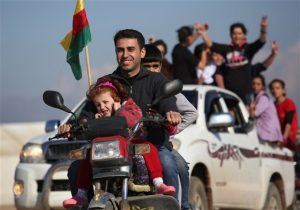