NEW COLUMN IS “Race And Sex Hegemons To Control The Skies.” It is currently featured on WND.COM , The Unz Review, The New American, American Renaissance, and on Saturday, at Townhall.com.

The topic was “the end of the all-male, all-white cockpit.”

The context: A June 3, 2022 TV episode, in which Fox News personality Tucker Carlson beseeched viewers to look beyond the race and gender of pilots, to his or her competence. “What’s color to do with competence?” he demanded to know.

Mr. Carlson was appealing to the wrong audience.

In America, where woke is ruthlessly propelled by the private-sector, the commercial aviation industry has been itching to replace humble men like Captain Chesley B. “Sully” Sullenberger, III, with black women (the looks of whom indicate that a good weave, tattooed eyebrows and eyelash extension are baseline requirements).

Just so there’s no confusion: Pilots with the right stuff are being selected out of their profession.

Granted, correlation is not causation, but if there is a statistically significant correlation between gender or race and the likelihood one survives a plane flight—well then, one might just want to consider these variables as proxies for safety and survival, however politically impolite it is.

Tucker might want to check the aggregate accident statistics to determine who are the best, safest pilots. By ScienceDirect’s telling, “… females employed by major airlines had significantly higher accident rates than their male counterparts overall.” [Emphasis added.]

To be expected, ScienceDirect then launches a fusillade of excuse-making weasel words to conceal with bafflegab that if you fly with a female, you’re a little less likely to reach your destination. It’s a ghost of a chance, but hey, life matters. Do you want to lose it?

Yes, female pilots have a higher error/accident rate, but never mind that say the Fake Science purveyors; this is only so because they are younger and less experienced. Airlines should make every effort to recruit and retain “experienced” females and manage diversity, they exhort.

Essentially—and while plummeting to his death—the passenger should search his bigoted soul. In addition to letting go of your life; you must release all bigotry. Those thoughts about how race and sex could well correlate with flight safety, and how you wish you had checked the pilot before you took the fatal flight: Let them go. Oh, and by the way, RIP, you sexist, you racist.

The desired outcome is that you fly with a less able pilot, ceteris paribus. …

… READ THE REST. NEW COLUMN, “Race And Sex Hegemons To Control The Skies,” is currently featured on WND.COM ,The Unz Review, The New American, American Renaissance, and on Saturday, at Townhall.com.

UPDATED (10/21/022): “Virginia plane crash kills flight instructor, injures student pilot.” Yes, and in addition to all else that was wrong with this fated flight—the flight instructor is a bubbly 23-year-old child/girl. Was.

To continue the math-related conversation begun in “U.S. Kids Can’t Read, Write Or Do Math, But Are No. 1 In Critical Race Theory,” here are more warnings from The Economist:

The writer says that, “Conservatives typically campaign for classical math: a focus on algorithms (a set of rules to be followed), memorizing (of times tables and algorithmic processes) and teacher-led instruction. Pupils in these classrooms focus on the basics, exploring concepts after obtaining traditional skills …”

“…Progressives,” he argues, “typically favor a conceptual approach to math based on problem-solving and gaining number-sense, with less emphasis on algorithms and memorizing.”

Irrespective, the achievement situation on the ground is as follows:

In 2018, American 15-year-olds ranked 25th in the OECD, a club of mostly rich countries. American adults ranked fourth-from-last in numeracy when compared with other rich countries. As many as 30% of American adults are comfortable only with simple maths: basic arithmetic, counting, sorting and similar tasks. American employers are desperate for science, technology, engineering and mathematics skills: nuclear engineers, software developers and machinists are in short supply. And while pupils’ maths scores are bad enough now, they could be getting worse. On the National Assessment of Educational Progress (NAEP), a national exam, 13-year-old pupils’ scores dropped five points in 2020 compared with their peers’ in 2012. The status quo does not add up. But teachers and academics cannot agree on where to go next.

This is not purely about “the conceptual approach to math,” versus an emphasis on “algorithms and memorizing,” as the writer frames it.

However important, more than the methods of teaching math, American failures are about the kind of kids America has and the philosophy undergirding their education—a highly variegated population educated under the philosophy of egalitarianism. Not everyone can learn math, yet this is the premise of American education.

Yes, “highly ranked mathematical nations” such as Singapore, China and Japan have the  best math in the world and are NOT teaching by progressive methodology.

But the East Asian nations are relatively homogeneous and have kids with the good potential (IQ). Although important, the statistically significant variance is to be found, I would wager, in the kind of population, more than in the method of teaching, however important.

I hate to say it, but as far as raw human capital goes, America is fast becoming a bit of a shithole.

RELATED READING:
“The Wussification Of The West: Will We Ban Shakespeare For Othello And Shylock?”
“U.S. Kids Can’t Read, Write Or Do Math, But Are No. 1 In Critical Race Theory“ 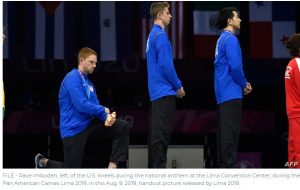