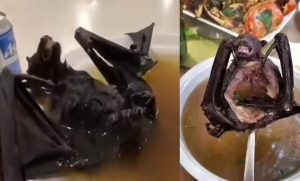 NEW COLUMN is “Law And Order Unites Main Street America.” It is now on WND.COM and the Unz Review.

… China might control thinking on its campuses, but can you imagine the Chinese Communist Party instructing its apparatchiks to promote material meant to make the next generation thieving, dumb and decadent? Unlikely, considering that the Chinese have a wicked work ethic, low-crime rates and that criminality is severely punished.

…  the book, In Defense of Looting: A Riotous History of Uncivil Action, has become the toast of the towns not yet burned down by the putrefying left. Its author, Ms. Osterweil, a welcomed guest on many “probing” programs, presumably to explain her “provocative” “thesis” of theft.

Indeed, we inhabit a culture in which high-brow polemics are banned and banished from the public square by grubby, low-brow, social engineers, from Facebook functionaries to the once-august “Publishers Weekly”: It dubbed Osterweil’s debut a “bracing rethink” of something or another.

A new kind of Kafka confronts any author whose thoughts veer from those of the mono-cultural mainstream. Books that enlighten never see the light of day or are digitally burned by the Amazon monopoly; pamphleteers that dim debate find publishers and “respectable” reviewers.

Happily, however, Amazon reviewers were having none of the looter lady, who, mind you, merely “identifies as a woman,” which is not the same as being a woman (in my non-expert opinion). They have not reconsidered their “bracing” views about Osterweil’s immoral enterprise. These book reviews are a riot of hashtags like #violence, #steal, #stupid, #vicky, #waste:

I gave it 2 stars instead of 1 because, while it is empty headed garbage, it was a bargain since I shoplifted it.

Since Amazon doesn’t have a physical bookstore from which I can steal this book, will they please implement a virtual looting option? One star.

Sam says 1.0 out of 5 stars: “Garbage: terrible ideas and a terrible book.”

Understated, yet “Astounded” gives In Defense of Looting 1.0 out of 5 stars, writing, charitably, that it “seems rather shallow and malevolent.”

If you think these Amazon reviews are the work of Russian trolls acting for Trump, “Century Rider” provides a corrective cue: “Want another 4 years of Trump?”, writes the reviewer on August 29. “This is the kind of ‘reasoning’ that will get Trump re-elected.”

Clearly, the restoration of law and order and the reverence for private property rights are the most powerful principles with which to unite main-street America, left and right, in the ramp-up to the November election. This is what Republicans must remember, before they scamper down the judicial rabbit hole of abortion.

As to the book: Here’s the true disgrace of In Defense Of Looting: someone read the book, endorsed its publication, someone edited it, someone else set it in type, designed a cover, compiled an index, read the proofs. Now people are reviewing it.

READ THE REST. “Law And Order Unites Main Street America.” It is now on WND.COM and the Unz Review.

My website domains have been banned by Facebook. If you are on this lowbrow forum, please register your support for my work by writing a review here. One line will do. I thank you from the bottom of my heart.

I gave an interview to an up-and-coming young star, Dissident Mama, aka Rebecca Dillingham. She writes:

“It’s been a long time in the making, but here it is: the first installment of my two-part interview with the always provocative and poignant Ilana Mercer. Part 2 should be published on Monday. Keep your eyes wide open for that – it promises to be explosive!”

The tagline at Ilana Mercer’s website is “Verbal swordplay for civilization.” Ain’t that the truth. The self-described paleolibertarian has been wielding words and fighting the good fight since well before I even thought about fleeing the clutches of feminism-atheism-socialism. She’s both provocative and poignant – a difficult thing to pull off anytime, much less in our postmodern dystopia.

I remember first stumbling upon Mercer at World Net Daily back in my neocon “daze” in the early 2000s. I recall being moved by not only her tenacity, but her cerebral style. Being such a prolific essayist, I then found her articles during my libertarian/ancap phase. And again, her writing spoke to me. Now, I’m what you’d call a paleoconservative/Southern traditionalist, and yet, there she is again: writing articles that say things we all want to say but don’t know how, or planting seeds for new thinking.

Now, I don’t always agree with Mercer. I’d say she speaks my language on most matters, but that’s really not what draws me to her work. When you read Mercer, you know that she’s coming to her conclusions through principled inquiry, deep research, a passion for justice, and an impatience with the insanity. In other words, she’s rational but on fire!

And Mercer can see through so many of the charades. Perhaps this is due to her years of experience or because, as Jack Kerwick says, “Ilana is in much greater supply of that ‘manly virtue’ than are most male writers today.”

As Southern stalwart Dr. Clyde Wilson explains of Mercer, “This is one libertarian who knows that the market is wonderful, but it is not everything.” Intellectual honesty like that is hard to come by these days, and that’s why Mercer’s writing is so damn good: it’s fearless and succinct. Bold and challenging. Accessible and engrossing.

Moreover, anyone who’s forever banned from Facebook, pegged as a hater by the SPLC, and given accolades by everyone from Peter Brimelow and Vox Day, to Tom Woods and Paul Gottfried, well, they’re pretty cool in my book. Plus, Mercer has become what I would call a mentor and a friend. So, for those of you who don’t already know her, please meet the never-to-be-duplicated Ilana Mercer. And folks who are already familiar with her and her independent streak, get ready to have your socks knocked off.